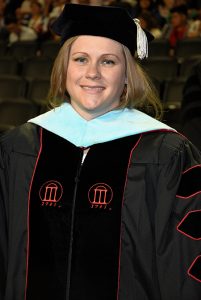 Janet Heard Kelly, a native of Vienna, recently graduated from the University of Georgia with a Doctorate of Education in Higher Education Management from the University’s Institute of Higher Education. She became a Double Dawg when she was hooded at the May graduate commencement ceremony after successfully defending her dissertation entitled ‘Focus on the Customer: Building a Student-Centered Customer Service Environment in Georgia’s Technical College System.’

During her studies, Kelly participated in two international trips for study abroad. In 2016, she traveled with her cohort to The Netherlands where she was able to take part in seminars and campus visits to learn more about European higher education. As part of this trip, she also visited the Peace Palace in the The Hague, toured Anne Frank’s home in Amsterdam, and made stops at some of Holland’s oldest universities.

In 2017, the group traveled to China, visiting Beijing and Shanghai. In both cities, the group toured multiple colleges and universities for comparative courses in higher education. While in China, Kelly was able to visit and walk the Great Wall of China and made stops at other historic locations including the Forbidden City, Tiananmen Square, and the Summer Palace.

She is the daughter of Jerry and Faye Heard of Vienna and the daughter-in-law of Joanne Kelly and the Late Jimmy Kelly. She is a 1998 graduate of Dooly County High School. She completed her undergraduate studies at ABAC and the University of Georgia, graduating in 2002 with Bachelor of Arts in Journalism with a concentration in Public Relations. She also earned a Master of Public Administration from Valdosta State University.

She is married to Jim Kelly and they live in Perry with their children, Amelia and Carson.