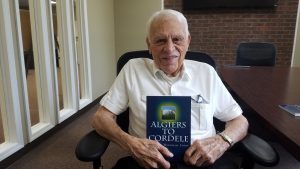 CORDELE– Jack Windham, a long-time resident of Cordele recently published a book within the last year. Algiers to Cordele, The Jack Windham Story is a retelling of Jack’s life. The book began from writing detailed reports about his findings at work in the early 1960s.

“When I worked for the Ford Tractor Distributor, I had a boss by the name of Clarence Reagan and he was a disciplinarian. He would explain to you what your job was and expect you to go do your job. He said ‘Now we’re here in the office, and you are going out to all of our dealers, if you don’t write an exact report of what you found and what you did, we don’t know what’s going on. So I expect you to write a detailed report when you go and call on these dealers so we know what’s going on out in the country.’ So he taught me to write a detailed report and then when I came over here, we had dealers from around the world coming to Vienna,” Jack said.

Jack has been keeping detailed reports of his work, and his life ever since. Jack was born and grew up in New Orleans before enlisting with the Navy for four years.

“I went to college for a year and a half and then the Korean War came along. I was about to be drafted, so on January 2, 1951 I joined the Navy for four years. I didn’t want to have to go in the army. I decided four years in the Navy is okay ‘cause we have a place to sleep and eat. Got out of the service after four years and went back to school for a couple of years,” Jack said.

When Jack first began college before the Navy, he was going to become a coach. After the Navy, he decided to change his degree to Electrical Engineering to continue his training from the Navy. Things did not go quite as planned. Jack was earning all A’s in classes up until he took one class with a foreign teacher he could not understand. He failed the class, which changed his path again. This time he decided to stop going to school and look for a job. That’s when he began his lifelong career Ford Distributor.

Jack spent 34 years training through Ford, seven years with Ford Distributor and another 27 years with Ford Tractor. Ford over the years gave Jack many opportunities to travel and train in different countries, as well as in different places all over the United States. Jack has visited a grand total of 27 countries.

Jack retired from Ford on July 1, 1991, just before Ford would have been taken over by Fiat in December 1991. Jack retired at the same time as one of his co-workers and friends, Wayne Garrett. Wayne took all of the reports Jack had written over the years and formed them into a book.

The book reads much like a journal, with certain dates mapped out and telling incredible stories he experienced. From pulling cadets out of a crashed “Flying Boxcar,” to a small village in Greece celebrating his arrival because he was the first American to visit since the U.S. liberated them from German occupation in 1944, to winning the jackpot, $34,900 at a dollar-slot machine in Reno, Nevada.

Jack is now 86 years old and has been married for 52 years (53 years in October) to Sandra, with their three children, Harry, Jonathan and Jack Jr.