Woman sentenced to life for murder 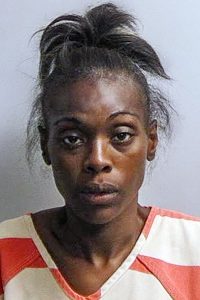 Salinda Hamilton is sentenced to life in prison.

CORDELE– Salinda Rotika Hamilton, 28-years-old of Cordele pled guilty today in Crisp County Superior Court to the offenses of Felony Murder, Arson in the First Degree, and two counts of Aggravated Assault. Hamilton was sentenced by Judge Chris Hughes to life with the possibility of parole and 20 years to serve for each of the aggravated assault counts. Hamilton was represented by defense attorney Shawn Hoover.

During the early morning hours of March 13, 2017, officers from the Cordele Fire Department and Crisp County EMS responded to a structure fire at 205 W 18th Ave. in Cordele. A camper behind the residence was fully engulfed in flames; and later inside the camper, officers discovered the remains of 30-year-old Carlton Lester. The Defendant Hamilton had a prior relationship with Stephen Lester, the brother of the victim, which had ended prior to these events. Stephen had a new girlfriend and Hamilton had been in arguments with them throughout the previous day.

Early the next morning, Hamilton went to the camper where Stephen, Carlton and the girlfriend were sleeping. Hamilton set a t-shirt on fire by means of an accelerant and placed the burning t-shirt into the vent on the camper. Awakened by smoke and flames, Stephen and his new girlfriend were able to escape through a broken window; however, Carlton did not escape and was killed by the smoke and flames associated with the fire.

District Attorney Brad Rigby extends his gratitude for a successful prosecution to the officers of the Georgia Bureau of Investigation, Cordele Fire Department, Crisp County EMS and Cordele Police Department for their efforts in the investigation.