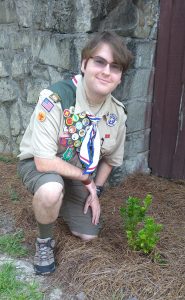 The latest member of Troop 270 to plan and coordinate his Eagle Scout project is Senior Patrol Leader and Life Scout Eli Lapeza. He got permission from the City of Cordele to plant azaleas around the foundation of the Cordele Boy Scout Hut. The purpose of the plantings is to prevent erosion and stop water from splashing back on the wooden siding of the historic city-owned building. The hut was built in 1940 and has served as a Scouting home for Cordele Boy Scouts in the seventy-eight years since.

The project would not have been possible without generous contributions from friends and family, as well as from TJ’s Italian-American Restaurant, Smoakies BBQ, Tri-County Seafood, and Haichi Japanese Restaurant. Dr. Jennifer Peebles donated pine straw that was used to mulch around the plants. A drip irrigation system was also installed to keep the azaleas properly hydrated. Eli’s plan was approved by the 8 Rivers District Eagle Scout Board of Review on January 11, 2018. The main work on the project took place on two straight Saturdays, May 12 & 19, 2018.

On the first weekend, Eli directed the activities, which started with the boys and their adult advisors clearing beds for the 26 azaleas all the way around the hut. As that was nearing completion, Eli showed his charges the locations for the plants. Once the locations were marked, the guys began to dig holes and plant the azaleas. The next day, Eli and his father installed the drip irrigation system.

The group worked on the installation for about four hours that first Saturday. Scouts Reid Brinson, Michael Frost, Ben Harris, and Korey Watts all pitched in to help with the plantings. They were assisted by Scoutmaster John Frost, and Assistant Scoutmaster Chet Lapeza. Eagle Scout and former Troop member Jack Frost also helped.

The second weekend saw some of the guys spend two hours spreading 35 bales of pine straw mulch to finish the project. Eli again directed Scouts Allan Reaves, William Reaves, and Korey Watts and Assistant Scoutmasters Chet Lapeza and Britt Brinson as they spread the pine straw around the plants.