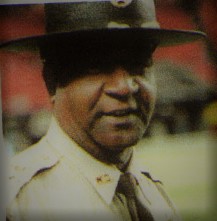 On Friday August 3, 2018, Colonel Lonnie W. Curry, former Chief Deputy with the Wilcox County Sheriff’s Office passed away.  Col. Curry was 60 years of age, he had been battling several

serious health issues. Colonel Curry was born on June 7, 1958 in Rochelle. He was son of the late Mark Curry and Estelle Phillips Curry. He was a member of the Piney Grove Baptist Church. He was employed by The Wilcox County Sheriff’s Office and the Rochelle Police Department with 31 years of service. He was a 1976 graduate of Wilcox County High School and

graduated from A.B.A.C. Police Academy in 1998. Survivors include: son-Joseph Curry of Warner Robins, daughters-Demetrice Thornton of Pineview, Kynila (Maliek) Brunswick of Jacksonville, Florida, Jada Curry and Jaliyax Curry both of Rochelle, brother-Robert (Mary) Curry of Union Point, sisters-Rosilyn Curry of Rochelle, Jacqueline (Raymond) Johnson of Rochelle, Verna (Cornelius) Singleton of Conyers and Patricia (James) Brantley of Soperton, 10-grandchildren and two-great grandchildren.  When speaking with residents in Wilcox County about Colonel Curry, they all spoke about how much he loved cooking chicken and ribs. Former Wilcox Sheriff, Stacy Bloodsworth gave his thoughts on Colonel Curry’s passing.

“I am an inmate at a Federal prison in Oakdale La. Before this I was a Sheriff in Wilcox County Ga. for 17 years and in law enforcement for 24 years. At the beginning of my career I had the pleasure of working for Lonnie Curry. Lonnie and I worked together for 24 years and spent most everyday together. Lonnie was a supervisor, co-worker, friend, mentor and a brother. Once when Lonnie and I were answering a call together we talked to a little boy that told us he collected baseball cards. He told us some cards were more valuable than others and you could tell a lot about the players. The little boy said that everyday people should be on cards such as baseball players. If they were you could tell a lot about people by looking at the cards. I was with Lonnie and drove the ambulance the day his mother passed away. Lonnie was with me the day my father passed away. I never had to second guess where Lonnie was when it come to our friendship, he was always there for me. Lonnie may not have had all the money in the world, but he was by far one of the richest men I have ever known when it comes to being a man, loving his family, being a friend and serving the people of Wilcox County as a public servant. Like the little boy said about the baseball cards, if everyday people were on cards as baseball players are Lonnie Curry would have been a Most Valuable Player! Lonnie will certainly be missed by all of us and never forgotten. I know where Lonnie is resting in peace today and it makes me happy to know that I will see him again one day soon.”

Officer John Hendley with Rochelle Police Department had these comments regarding Colonel Curry and his passing:

Wilcox County Sheriff Robert Rogers stated that although he hadn’t had the pleasure of working with Colonel Curry as he was retired from law enforcement, he was a good friend and his heart was always in it.  He stated that his staff who had worked with Colonel Curry, were very fond of him and his leadership while he was a member of Wilcox Sheriff’s Office. Sheriff Rogers went on to say Colonel Curry, was a great guy and dedicated servant to the citizens of Wilcox and that he helped a lot people along the way. We are saddened by his passing and pray for his family and friends as they grieve. Sheriff Rogers concluded by saying it was a privilege to for him to be able to honor and recognize Colonel Curry’s 31 years of law enforcement to Wilcox and be able to present him with a plaque back on June 25, 2018.

The Wake (visitation) for Colonel Curry will be Friday August 10, 2018 beginning at 7 p.m. and will be held at M.G. Frazier Chapel 1016 4th Avenue Rochelle, Ga.  The Celebration of Life service will be Saturday, August 11, 2018 at 11 a.m. and will be held at the former Wilcox County High School Gym located at 186 7th Avenue Rochelle, Ga. Musical selections will be by Antioch Baptist Church Choir, Reading of Scriptures by Dr. Norris Hall, and ‘Words of Comfort’ by Wilcox Sheriff, Robert Rogers.

Robert Rogers, Mr. Lanier Keene, friend and Chairman of Wilcox Commissioners, William Dozier friend, and Vickie Kemp classmate.  Pastor Danny Allen will provide special remarks and reading of obituary, soloist will be Kathy Daniel with Eulogy by Reverend Travis Johnson. The Repass will take place at the former Elementary School Cafeteria located at 104 Gordon Street in Rochelle.  Active Pallbearers will be members of Wilcox County Sheriff’s Office; Honorary Pallbearers will be all law enforcement in attendance.