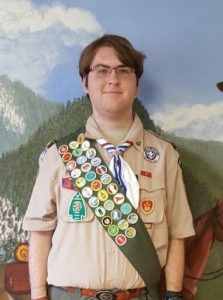 CORDELE – Cordele Boy Scout Troop 270 has another new Eagle Scout.  Eli Lapeza becomes the thirtieth member of the Troop to earn Scouting’s highest award since Troop 270 was first chartered in 1990.  Eli completed his Eagle Scout Board of Review on July 12, 2018.  Under the guidance of Scoutmasters Robert Sears and John Frost, Eli rose through the ranks to attain the rank of Eagle Scout.  Only 6% of Boy Scouts reach that rank.

Eli is a 2017 graduate of the National Youth Leadership Training program.  He attended the 2017 National Scout Jamboree.  Lapeza is a Brotherhood member and currently serves as Blackwater Chapter Chief for the Withlacoochee Lodge of the Order of the Arrow, Scouting’s National Honor Society.  He has earned 37 merit badges.  He is the grandson of Betty Ruth and the late Hugh Gandy and Mildred and the late Chester R. Lapeza, Jr.

Eli’s Eagle Scout Project was foundation plantings around the historic Cordele Boy Scout hut.  The city-owned structure was built in 1940.