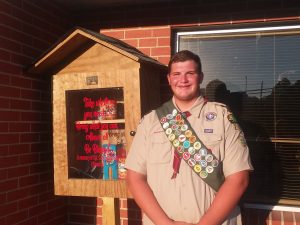 CORDELE – The latest member of Troop 270 to plan and coordinate his Eagle Scout project is Life Scout Joshua Smith.  He was asked to build a benevolent food and supply station for Hand of Hope, Inc. on South 7th Street in Cordele.  The station is designed so that anyone may donate non-perishable food or other emergency items.  Anyone in need may access the items at any time.

Josh’s plan was approved by the 8 Rivers District Eagle Scout Board of Review on February 8, 2018.  The box was constructed on Saturday, June 23, 2018.

Josh directed the activities, which started with the youth and their adult advisors laying out the boards for the station.  Guys took turns holding the pieces while others screwed them together.  Once the wooden parts were assembled, shingles were added to the roof and a plexiglass door was attached to the front.  The small house was mounted onto a post mounted in concrete.