The coronation of a queen 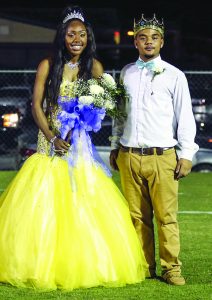 Special to the Dispatch

ROCHELLE — When JaMerical Marshall walked the field Friday night, September 28, at Wilcox County High School’s Homecoming Halftime, she was nervous.  She was also relishing the moment and thinking how happy she was to be chosen by her classmates to “even” be on Homecoming Court.

Her father, Christopher Marshall, escorted his daughter to the designated spot on the field and soon afterwards, JaMerical was announced the 2018 WCHS Homecoming Queen.  At that moment, her face shone brighter than the vibrant yellow-sequined gown she wore.

“Wow, Wow, I can’t believe this!” JaMerical said she recalls thinking at the time.

So, how does a girl come to attain the honor of being their school’s Homecoming Queen?  For JaMerical, the honor was not one of campaigning.

“I didn’t campaign any at all for this position,” she stated. “I felt like this honor was something to be earned over the course of my high school years.”

Earned she did as to become the Homecoming Queen, a representative has to have the majority of votes in the entire high school, not just their grade.

JaMerical stated that throughout her high school years she has been very friendly, kind, and “loves to help people.”

Marshall, who has grown up in the Wilcox County School System, said, “There have been two teachers that have been instrumental in my life and have meant so much to me throughout all my school years – Celia McGlamory and Lisa Keene.”

The daughter of Semika Lawson and Christopher Marshall has some serious plans for her life after high school – to serve her country.

Ms. Marshall will most assuredly be in good physical shape to join any

branch of service as she is quite athletic and plays for the WCHS Basketball and Softball teams.

“I want to tell the students at Wilcox County High School that I am very honored to be your Queen, so thankful to even be on the Court.  I’m very appreciative for all the votes.”