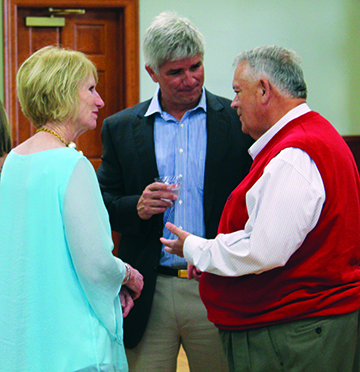 State House Speaker David Ralston (right) talks with Gail Wade (left) and Noel Williams, Jr. during a meet-and-greet with Ralston that was hosted by Williams' campaign for the house seat being vacated by Buddy Harden, who is retiring.

“I don’t think you’re going to hear very much about waves, from here on, of any color,” Ralston said during his stop in Cordele on Tuesday. “I think a lot of the races are going to come down, like they almost always are, to local issues and the candidates.”

Ralston said the state legislature had a lot of success in the 2018 regular session, and he expects even more in 2019.

“We had one of the best sessions we’ve ever had this year. We cut taxes, we fully funded QBE, we appropriated money for school safety,” he said. “I want to continue the work we’ve been doing on revitalizing rural Georgia, and that’s why I want to work with Noel Williams.”

Williams is running to replace State Representative Buddy Harden, who is retiring. Williams said he would be honored to work with Speaker Ralston and wants to learn from the long-time legislator as well as people from the community.

“The good Lord gave me two ears and one mouth, and so I’m going to listen twice as much as I talk,” Williams said.