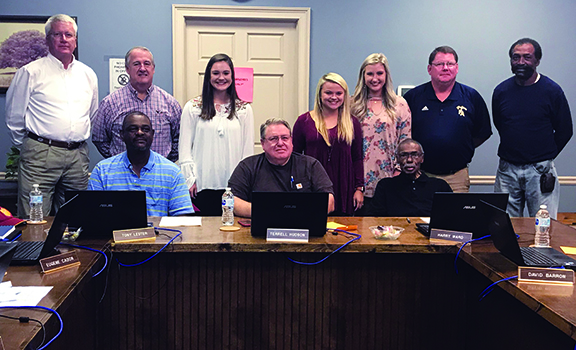 VIENNA—The Dooly County Board of Commissioners held their regularly scheduled meeting for the month on Thursday.

Engineers deemed Dooly High Road to be the one in the group that is in the worst shape, followed by Liberty Church and Five Points, which are in about the same shape, with Third District Road being in the best condition out of the group.

Cost estimates for the road projects total around $1,115,000, whereas Dooly’s LMIG budget is roughly $691,000. There are still some factors to be considered in the application, so commissioners will finalize the decision on where the LMIG money will be used at a meeting in the near future.

County EMA director Kenny Calhoun was on hand to request that the commissioners execute a memorandum of agreement with the River Valley Regional Commission for assistance with the five-year update (2021-2025) to the Dooly County Pre-disaster Mitigation Plan.

The plan is used to help identify places in the county where there are known hazards or risks, and then come up with a way to mitigate any potential impact from those risks. The commissioners moved to execute the memorandum of agreement.

Announcements were also made about Veterans Day celebrations in Dooly County on Friday, November 9.

The Vienna Woman’s Club and the City of Vienna will honor veterans of the US military on November 9.

A social hour for veterans of all branches of the armed services will be held at 9 a.m. at Vienna City Hall, followed by a ceremony at the Dooly County Courthouse at 10.

The public and veterans are invited to attend the ceremony. Veterans of World War II or any surviving spouses of military personnel will be given special recognition. They are asked to contact Sharon Wilkin at 229-268-4857 as soon as possible.

The Lions Club of Unadilla will be hosting a Veterans Day program at 7 p.m. on Friday, November 9 at Veterans Park in Unadilla.