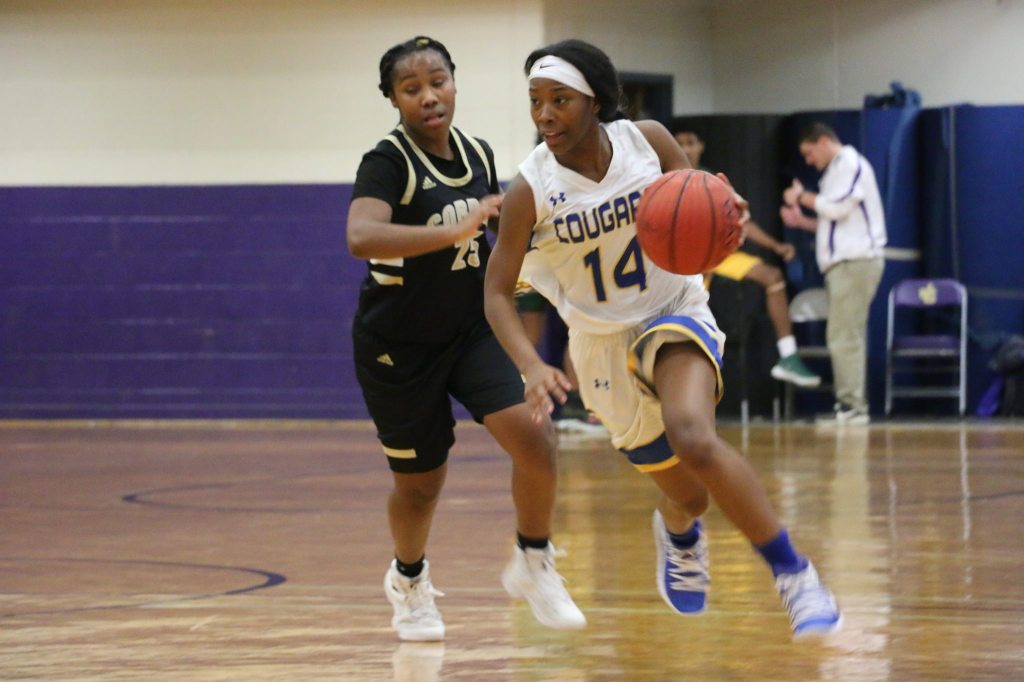 Crisp County’s Alexis Porter dribbles the ball up the floor ahead of a Twiggs County player during last Saturday’s 45-37 Lady Cougar win. (Photo by Christy Bozeman)

The Crisp County Lady Cougars picked up their first win of the season in the Jones County Christmas tournament this past Saturday (December 22) by defeating Twiggs County 45-37.

The Lady Cougars fell to Central Macon 53-23 earlier on in Jones County Christmas Tournament action on Friday. Bozeman led the Lady Cougars in that game with 11 points, while Porter scored seven and Tykeemah Armstrong scored five.

The Crisp Academy varsity basketball teams played games at St. George’s Episcopal School on Thursday the 20th. The Lady Wildcats were defeated 49-30 in their game while the CA varsity boys won 50-32.

Crisp Academy’s varsity boys finsihed their December schedule with a game at the Academy for Classical Education in Macon on Friday the 21st. The CA boys were victorious over ACE by a score of 72-41. CA’s next games will be at home on Friday, January 4, against Fullington Academy starting at 6:30 p.m.

Wilcox County’s teams played in tournament action against Terrell County in the Class A Power Classic on the 21st. The Lady Patriots ran their season record to 8-3 with a 57-31 win over Terrell, while the Patriots defeated the Greenwave 81-79 to move to 11-0 on the season.

Both Wilcox teams were then in Turner County’s holiday tournament against Worth County tonight. The Lady Patriots defeated Worth 54-41 on the night, while the Patriots were defeated for the first time this season in their game against Worth by a score of 73-65.  Wilcox will next play this coming Thursday at Dooly County starting at 6 p.m. Recaps from the Wilcox games versus Worth can be viewed here: Wilcox basketball teams split games with Worth at Turner County tournament

Dooly County played region rivalry games against Macon County on the 21st. The Lady Bobcats won their game on the night 50-42 to bring their record to 6-3 overall on the season.

Macon County won the boys’ contest 48-46 on a score with less than eight seconds to go in the game. Jeff Felton and Shamon Zanders led the Bobcats in scoring with 14 points each. Zeff Felton finished with 11 points, and the other scorers for Dooly in the game were Reggie Smith with five points and Seve Sutton with two.

The loss snapped the Bobcats’ seven game winning streak and put their overall record at 7-2 (6-1 in region) so far on the season.

Both Dooly teams are scheduled to play in the Turner County Christmas tournament tomorrow with the Lady Bobcats set to play McIntosh at 10:00 a.m., and the Bobcats to play at 2:30 p.m. Dooly will then host Crisp County Saturday night for games starting at 6 p.m in Vienna.