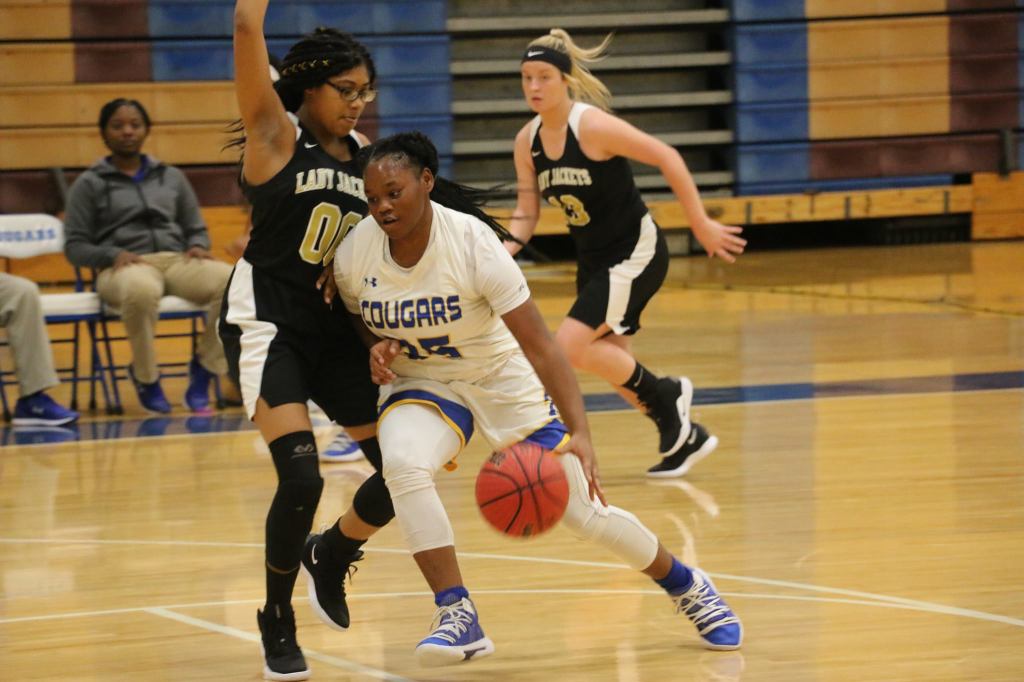 Crisp County's E'lacious Holt dribbles up the floor while holding off a Wayne County defender during Friday afternoon's game. (Photo by Christy Bozeman)

CORDELE— Crisp County’s varsity basketball teams hosted the Wayne County Yellow Jackets Friday afternoon as a part of their Christmas break schedule. The Wayne County Lady Yellow Jackets (11-1) defeated the Lady Cougars on the day 39-29, and Wayne’s boys team (10-4) completed the sweep with a 66-56 win over the Cougars later on that night.

Wayne scored the opening basket of the game to take a 2-0 lead, but Crisp senior KJ Williams answered with a base line jumper to tie the score. From there the Yellow Jackets went on a 12-0 scoring run to take a commanding 14-2 lead in the first quarter, but Willie Poole gave the Cougars some life with a three-pointer at the buzzer. Wayne was ahead 14-5 entering the second period.

Crisp trailed by as many as 17 points about halfway through the fourth quarter, and chipped the deficit down to as close as eight later on before ultimately falling by the final score of 66-56.

Williams led the Cougars in scoring on the night with 15 points in the contest and Coleman finished with 13. Other Cougar final point totals: Hall- eight points, McKenzie- seven, Willis- six, Poole and Cross- three points each, and Spivey- one.

The Lady Cougars trailed 11-0 at the conclusion of the first quarter of their loss against Wayne County. Crisp did manage to outscore their opponent 29-28 over the final three quarters but it was not enough to pull off a come from behind victory.

Both Crisp teams dropped non-region contests against Dooly on Saturday night (December 29). The Cougar teams play their first region games of the season on Friday night at Cook County starting at 6 p.m.

Dooly County’s varsity basketball teams were in action against McIntosh County Academy in Turner County’s Ronalda Pierce Holiday Classic in Ashburn on Friday. The Lady Bobcats defeated McIntosh 58-26 for their seventh victory of the season Friday morning, while the Bobcats won their game against McIntosh later in the day by a score of 66-40 for their eighth win of the season.

Rashad Lucas posted 21 points, 13 rebounds, and a steal for the Bobcats vs McIntosh. Zeff Felton also had a big game with 16 points, 18 rebounds, six assists, two steals, and three blocks. Shamon Zanders helped out with 10 points, while Jeff Felton put up eight points and 10 rebounds.

Dooly swept Crisp in games on Saturday night with a 68-49 win over the Lady Cougars, and an exciting 58-57 win in the boys’ games. The story from those games can be read here: Bobcats hold off Cougars in thrilling contest