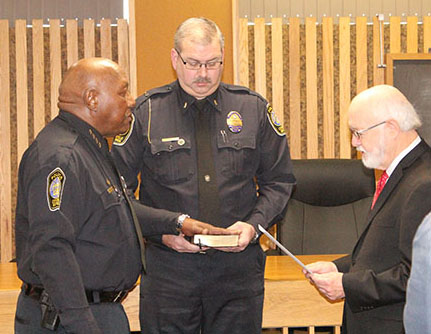 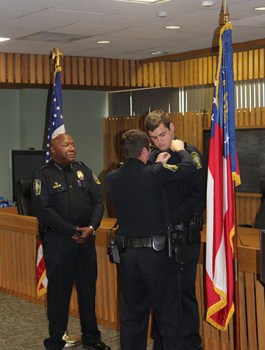 CPD Patrolman Jonathan Cranford pins a badge on his stepson, Christopher McGee (right), who is newly graduated from the police academy. 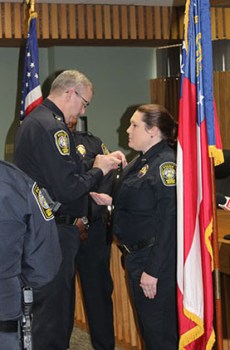 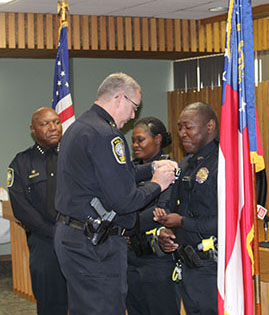 Cordele Municipal Judge Rusty Wright administered the oath of office to new Cordele Police Chief Lewis Green on Thursday during a ceremony honoring officers who had demonstrated bravery and gone above and beyond the call of duty.

Green thanked the crowd that filled the courtroom at City Hall after taking the oath. He stressed that his gratitude went first and foremost to God.

“I would like to thank God first,” Green said. “He’s the one who got me here.”

Green also expressed thanks to his family, the members of the Cordele Board of Commissioners, City Manager Edward Beach, and others.

Green also presented commendations to three patrol officers. One went to Patrolman Brandy Bloodsworth, who was recognized with a plaque and a citation honoring her with the Department’s Life Saving Award for her quick thinking when she arrived at the scene of a dangerous accident.

CPD Corporal Kim Mason and Patrolman Michael Telfair were honored with Unit Commendations for their actions to assist a citizen who had been hurt when a car struck his bike while he was riding to work. Mason and Telfair purchased a new bicycle and a reflective vest for the man.