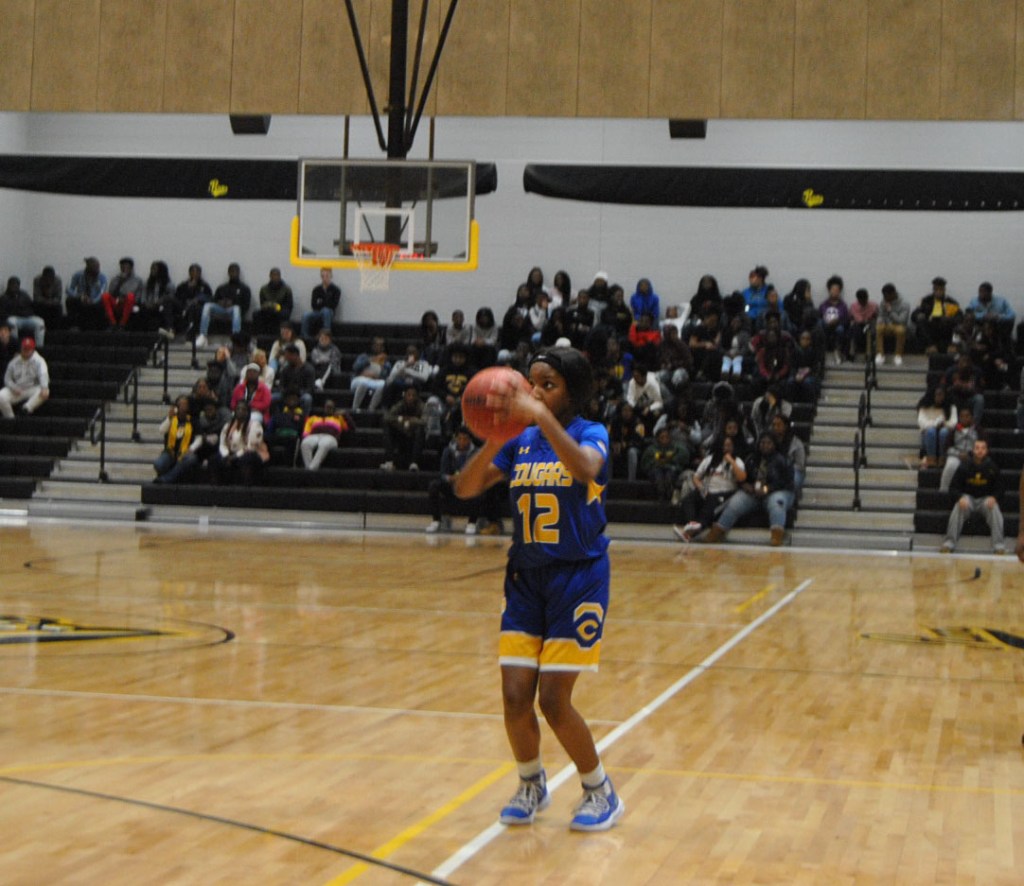 Crisp County's Aaliyah Hardemon lines up an open three-point shot during the Lady Cougars' loss at Worth County on Friday night. She finished the game with 11 points.

SYLVESTER— Crisp County High School’s basketball teams were in action at region opponent Worth County on Friday night in Sylvester, and the hosts came up with wins in both contests.

The Lady Cougars trailed by 13 at halftime of their contest before fighting back to take a fourth quarter lead, but ultimately fell to Worth 54-48. Later on in the night, the Rams led the Cougars by as many as 18 points in the fourth period before Crisp fought all the way back to within five points, but Worth held off the comeback attempt by a final score of 59-48.

The Lady Cougars trailed Worth 17-7 at the end of the first period, and the Lady Rams extended their lead going into halftime by outscoring Crisp 11-8 in the second quarter. Aaliyah Hardemon and Jadah Mumphrey each had four points in the first half for the Lady Cougars, while E’lacious Holt, Vernasia Sanders, Adasia Lee and Peyton Bozeman each contributed on the Crisp County first half score sheet. Worth County was ahead 28-15 at halftime.

The Lady Cougars used a big third quarter to fight their way back into the game, as they outscored the Lady Rams 20-10 in the period. Holt contributed 10 of the Crisp County third quarter points by way a pair of three-point shots and four made free throws. Bozeman tacked on four points in the quarter, while Hardemon, Mumphrey and Alexis Porter each helped out with a basket apiece. Crisp had cut the Worth County lead to 38-35 entering the fourth quarter.

The Lady Cougars started the final period with a 5-0 scoring run on points from Holt, Mumphrey, and Chelsey Harvey, to take a 40-38 lead with 5:45 to play in the contest. Worth brought the score back level with a basket shortly after and the teams swapped some important points over the next couple of minutes.

Hardemon knocked down a three-pointer to give CCHS the lead at 43-40 with just over five minutes to play. Worth brought the game back level at 44-44 with three and a half minutes to play, and the Lady Rams outscored Crisp 10-4 over the remainder of the contest to escape with a 54-48 win.

Holt finished the game as Crisp County’s leading scorer with 13 points to go along with two rebounds, one assist and two steals. Hardemon put up double figures as well with 11 points, and she also had one rebound, three assists and two steals on her final stat line.

The defeat dropped the Lady Cougars to 1-19 overall on the season and 0-7 in region play.

In the boys’ game later on in the night, Crisp and Worth traded baskets to open up the contest before the Rams put together a big run to end the first quarter. The game was tied at 7-7 before Worth went on a 10-0 scoring run to go into the second quarter with a 17-7 lead. Ty McKenzie, KJ Williams, and Malik Hall each scored a basket in the quarter to combine for Crisp County’s seven points.

Worth County scored the first points of the second period to take a 12-point lead, but the Cougars outscored the Rams 10-6 over the remainder of the period to cut the lead to eight entering halftime. McKenzie, Williams, PJ Coleman, Damion Cross and Willie Poole combined for the 10 Crisp County points in the period, and the Cougars trailed 25-17 going into the break.

Worth subsequently outscored Crisp 18-11 in the third period to bring their lead to 43-28 going into the fourth quarter. Poole, Coleman, Williams, and Hall each added points to their total in the quarter for Crisp, while Jayren Fox and Cortez Thomas tacked on their first points of the night to help out.

The fourth period started with a Worth County three-pointer that stretched the Ram lead out to 46-28. The Cougars then put together a 17-4 run over the next several minutes to cut Worth’s lead down to 50-45 with just over two minutes to go in the game, but the Rams finished the contest on a 9-3 scoring run for a 59-48 win. Coleman had seven points in the quarter for the Cougars, while Williams, Hall, and McKenzie each also increased their total. Mar Daniels and AJ Lofton also got on the score sheet for Crisp in the final period.

Williams led the Cougars in scoring in the contest with 11 points, and Coleman also finished in double figures with 10. Other CCHS final point totals from the game were as follows: McKenzie- seven points, Hall- six, Poole- four, Cross, Fox, Thomas, Lofton and Daniels- two points each.

The defeat dropped the Cougars to 7-13 overall on the season and brought their region record to 4-3 overall.

Crisp’s teams were in action against Dooly County on Saturday night. A recap of the CCHS games versus Dooly can be viewed using this link: Crisp County basketball splits weekend matchup with Dooly

Crisp and Worth will matchup one more time in the regular season in Cordele on Tuesday, February 5. Before that, CCHS plays Monroe High one more time this Friday night in Cordele starting at 6 p.m.