Authorities on lookout for escaped inmate 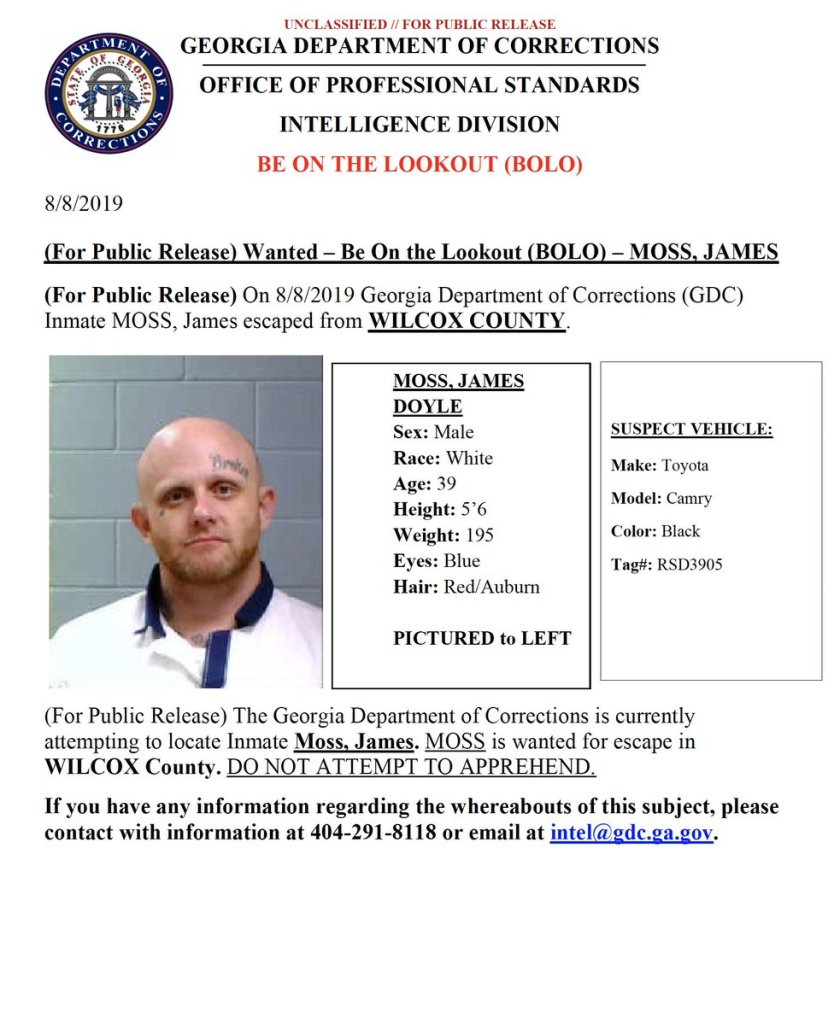 The Georgia Department of Corrections issued this BOLO "Be on the lookout" notice via social media at roughly 3:20 p.m. on Thursday. The inmate, James Doyle Moss, walked off his state prison work detail at the Cordele Farmers Market at approximately 1:30 p.m. Thursday.

Authorities are on the lookout for a Wilcox State Prison inmate who walked away from his work detail at the Cordele Farmers Market at approximately 1:30 p.m. today.

The Georgia Department of Corrections issued a wanted poster for James Doyle Moss via social media at around 3:20 p.m. Local law enforcement officers began searching for Moss in the vicinity of the farmers market roughly two hours prior, according to information gathered by monitoring radio traffic between Crisp County Sheriff’s Office units and Cordele Police Department units.

It is unknown at this time how Moss was able to escape from the state prison work detail. The Department of Corrections, which runs the state’s prison system, is the lead agency in the search for Moss. Law enforcement officers believe he may have been assisted by a white female driving a black Toyota Camry with a license plate bearing “RSD 3905.”

Moss, who is a 39-year-old white male approximately 5’9″ in height and 195 pounds in weight and was last seen wearing a white prison jumpsuit, had been an inmate at Wilcox State Prison since July of 2018 after convictions on burglary charges in both Forsyth and Bartow counties, along with charges of fleeing/eluding police, obstruction of a law enforcement officer, reckless driving, and driving with a suspended license.

Those convictions stemmed from an incident in early July of 2015. Moss was sentenced to serve a term of 20 years in prison, with his earliest possible release date set for September 25, 2022.

This hasn’t been Moss’ first stint in the state prison system. He was previously incarcerated from March 1, 2016 until September 5, 2017 for convictions on theft charges, DUI, fleeing/eluding, and other traffic offenses as a result of a May 8, 2011 incident in Gordon County. He also was convicted of methamphetamine possession in a separate incident. He has been in and out of the state prison system for various offenses since 2007, according to information on the Georgia Department of Corrections website.

People who may encounter Moss should not attempt to apprehend him and contact law enforcement immediately. The state corrections department requests that anyone with information about Moss’ whereabouts call 404-291-8118 or email intel@gcd.ga.gov.

This is a developing news story. Check back for updates or read all about it in Saturday’s print edition of the Dispatch.