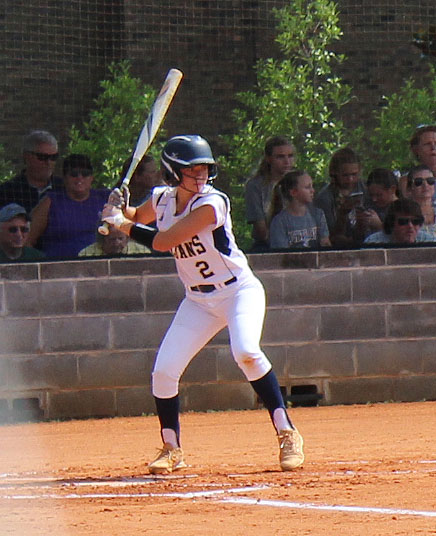 Fullington Academy's Carmen Phillips awaits the pitch during one of her at-bats in the 14-1 Lady Trojan win over Terrell Academy on Friday afternoon.

The Crisp County High School varisty softball team’s season opener, scheduled for this past Monday afternoon, was rained out, but the Lady Cougars got on the field for the first time this regular season with a game at Coffee County High School on Wednesday afternoon. Crisp came away with a 1-0 win over Coffee on the day in a pitchers’ duel.

Rilee Duckworth pitched seven shutout innings in the game to lead the Lady Cougars to the victory. She allowed just three hits and recorded two strikeouts, as she outdueled Coffee pitcher Madison Strickland for the win.

Crisp scored the game’s only run during the top of the third inning when Jo Brady hit an RBI-single to center field that allowed Kirin Webb to score. Duckworth made sure the one run was enough with her shutout effort. Ainslee Forsythe led the Lady Cougars on offense with two of the team’s four hits in the game.

Then on Thursday afternoon, the Lady Cougars had a road game at Berrien County and the two teams played to a 2-2 score line in the fifth inning before bad weather forced a stop to the contest.

Crisp County will be on the road at Lowndes County on Tuesday afternoon for their next game.

The Wilcox County High School softball team finished off a productive opening week of the season with a 9-1 victory over region rival Telfair County on Thursday afternoon.

Wilcox senior Chastity Stephens pitched six innings for the Lady Patriots and allowed just one unearned run on five hits while striking out seven Telfair batters to record the victory.

The Lady Patriots got on the scoreboard first in the contest when Bailee Barnard hit a two-run single to left field that allowed Madison Terry and Maci Martin to reach home plate.

Wilcox next added a third run in the top of the third inning by way of a Telfair error that saw Grace Keene score.

Stephens then hit her second home run of the season in the top of the fifth inning to stretch the Wilcox lead out to 5-0.

Telfair County subsequently scored their only run of the game in the bottom half of the fifth, but the Lady Patriots piled on four more runs in the top half of the sixth inning for the final score line of 9-1.

Grace Keene hit a sacrifice fly in the top of the sixth that scored Jalynn Keene for the sixth run. Carlee Walls followed with a two-run double, which plated Barnard and Destiny Tisdol to make the score 8-1, and Dee Howard later scored the ninth Wilcox run after a Telfair error.

The win gave the Lady Patriots a 2-1 overall record so far this season, with a 2-0 mark in region 2-A play.

Up next for Wilcox is a trip to Atkinson County for more region action on Tuesday afternoon beginning at 5 p.m.

For recaps of Wilcox County softball’s games from earlier this week follow the links below:

Fullington eases past SGA and Terrell for first wins of 2019

A rainout also prevented the Fullington Academy softball team from playing their season-opening game in Pinehurst on Monday afternoon, so the Lady Trojans instead played their first game of the 2019 season on Thursday at Southwest Georgia Academy. Fullington took the road win over SGA in just five innings on the day by a final score of 14-5.

The Lady Trojans opened up the contest with four runs in the top of the first inning. A two-RBI double off the bat of Lauren Rucker plated Ella McGalliard and Carlee Roberts for an early 2-0 lead for Fullington. Lillie Grace Register and Maddy McLeod each had RBI singles later on in the frame to increase the lead out to 4-0 entering the bottom half of the inning.

SGA scored three runs on six hits in the bottom of the first, but Fullington maintained the lead at 4-3 entering the second inning.

The Lady Trojans subsequently piled on eight more runs in the top of the second frame to take complete control of the game. McGalliard drove in three runs in the second inning with an RBI-triple, while Parker Wall, Register, and Marley Jones each added RBIs of their own.

SGA subsequently tacked on a run in the bottom half of the second frame to make the score 12-4 in favor of Fullington entering the third inning.

Rucker later drove in another Fullington run with an RBI-single in the top of the third, and McGalliard knocked in the final run of the game in the top half of the fourth inning with her fourth hit of the contest.

McGalliard also pitched five innings for the Lady Trojans to get the win.

Fullington then played a home game against Terrell Academy on Friday afternoon and the Lady Trojans won 14-1 in that contest to move to 2-0 on the season.

Friday’s win over Terrell ended up as another run-rule shortened win for Fullington, as the Lady Trojans tallied four runs in the first inning, nine in the second, and one more in the bottom of the third frame.

Maggie Rogers pitched four innings for the Lady Trojans and struck out five Terrell batters while just allowing one earned run in the contest to pick up the win.

Fullington will be in Cordele to take on Crisp Academy for their next game on Tuesday afternoon at 4 p.m.