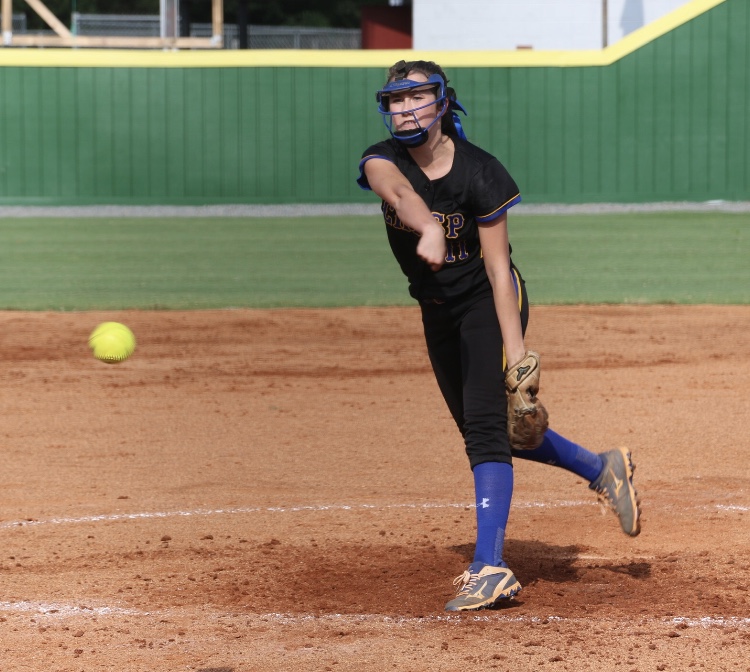 The Crisp County Lady Cougars (1-1 record) played a road game at Lowndes County on Tuesday afternoon, and the hosts came up with the win over CCHS in the contest by a final score of 7-5.

Crisp took the lead in the game before the first out as senior Riley Blampied hit a leadoff home run to open the scoring.

The Lady Cougars held the lead at 1-0 over the next two innings, and they subsequently increased their advantage to 5-0 with four runs in the top half of the fourth.

Peyton Bozeman led off the top of the fourth frame with a single and then reached second shortly after on an error. Blampied then drew a one-out walk and Kirin Webb followed with a single to load up the bases for Crisp.

Following the second out of the frame, Olivia Taylor picked up an RBI with a bases loaded walk, and Ainslee Forsythe provided the big hit of the inning with a three-run double in the next at-bat. The Lady Cougars led 5-0 going into the bottom half of the fourth frame, but Lowndes started to chip away at the lead shortly after.

Offensive leaders for Crisp County in the game: Bozeman- two hits and one run scored; Blampied- one HR, three walks, one stolen base, and two runs; Forsythe- one hit, one walk, and three RBIs; Webb- one hit and one run; Taylor- two walks, one RBI, and one run; Jo Brady and Macy West- one hit apiece.

Rilee Duckworth pitched four innings and one-third for the Lady Cougars, and Olivia Bridges pitched a scoreless inning and two-thirds with a pair of strikeouts.

Crisp County is scheduled for three games this weekend in the Watermelon Tournament at the Crisp County Youth Ball Complex. The Lady Cougars will play Fullington Academy on Friday evening at 5:30 p.m. Then on Saturday Crisp is scheduled to play Bacon County at 9:30 a.m., followed by Jenkins County at 11:30.

The Wilcox County High School softball team played a doubleheader on the road against region opponent Atkinson County on Tuesday evening, and the Lady Patriots took both contests of the two-game set by final scores of 15-3 and 11-1.

Wilcox led Atkinson by a score of 6-3 after five innings played in game one of Tuesday’s doubleheader, and a nine-run outburst in the top half of the sixth inning by the Lady Patriots subsequently left no doubt of a Wilcox win.

Wilcox County finished game one with a total of 15 hits and committed just one error on defense throughout the contest. Wilcox senior Chastity Stephens hit two home runs in the game, recorded five RBIs, scored four runs total, and stole two bases to lead the offense.

Atkinson scored the first run of game two in the top of the first frame, but the Lady Patriots scored one run in the bottom half of the first, four runs in the second inning, and then six in the third frame to finish the game with the 11-1 win after just four innings played.

Jalynn Keene pitched all four innings for Wilcox and allowed just the one Atkinson run on five hits, while also striking out two batters.

The Wilcox defense again played a key role in the victory, as the team committed no errors in game two.

The two wins gave Wilcox a 4-1 overall record on the season with a 4-0 mark in region competition.

Up next on the schedule for the Lady Patriots is a pair of games on Saturday morning in Cordele at the Watermelon Tournament at the Crisp County Youth Ball Complex. Their first game on Saturday is against Emanuel County Institute at 9:30 a.m., and they are scheduled to play East Laurens for their second game at 11:30.

Fullington and Crisp Academy were also in action on Tuesday afternoon. The Lady Trojans of Fullington  defeated the CA Lady Wildcats 16-4 in that contest. For the full recap of the game follow this link: Fullington softball tops CA in early-season matchup