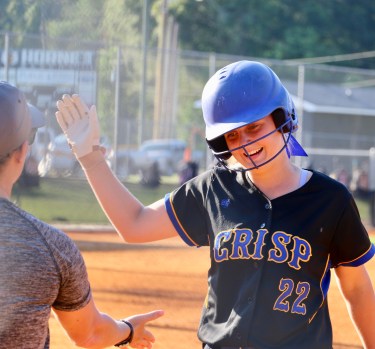 Crisp County’s Jo Brady is all smiles after reaching base during Thursday’s 4-2 Lady Cougar region win over the Cook Lady Hornets. Brady also hit a home run earlier in the week in the CCHS win over Tift County on Tuesday afternoon. (submitted photo) 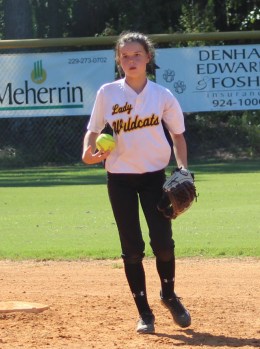 Crisp Academy shortstop Isabel Fernandez looks a Terrell Academy base runner back to first following a hit during CA’s defeat against Terrell on Thursday afternoon.

The Crisp County High School varsity softball team picked up two wins this week to improve their overall record to 6-2 on the season.

On Tuesday the Lady Cougars made a trip down to Tifton and came away with a 16-5 win over the Tift County Lady Blue Devils. Then on Thursday evening, Crisp picked up an important road region win over Cook High School in Adel by a final score of 4-2 after extra innings.

Leading the way for the Lady Cougars in the 16-5 win at Tift County were Jo Brady, Riley Blampied and Sara Ruth Raines, who all had two hits in the contest. Brady went 2-for-4 with a home run and a single, Blampied was 2-for-3 with a homer and a double while also drawing two walks, and Raines was 2-for-5 with a pair of singles.

Kirin Webb, Ainslee Forsythe, Macy West and Peyton Adkins all added one hit apiece for the Lady Cougars in the win over Tift.

Rilee Duckworth pitched six innings for Crisp in the contest to earn the win. She allowed six hits and walked one batter while recording three strikeouts. Olivia Bridges finished the game off for the Lady Cougars by pitching a scoreless inning and striking out one batter.

In Thursday’s region contest at Cook, Crisp took an early 1-0 lead in the first inning. Blampied led off the game with a double to right field and Webb moved her up to third base with a fly out. Brady subsequently provided the RBI hit that scored Blampied for the first run of the game.

The Lady Hornets tied the score with a run in the bottom half of the fifth frame, and the two teams stayed tied at 1-1 up until the 10th inning.

A tiebreaker rule went into effect in the 10th, where the player to make the last out in the previous frame started the inning at second base. Raines started the top of the 10th at second for Crisp County and Peyton Bozeman moved her up to third using a sacrifice bunt.

Cook recorded the second out of the inning shortly after, and then intentionally walked Blampied, giving Crisp runners at the corners with two outs. Blampied subsequently stole second, and Webb followed with a 10-pitch at bat that led to an RBI single that plated Raines. An error on the play also allowed Blampied to make her way to the plate for a 3-1 Lady Cougar lead.

Brady followed up with an RBI single that scored Webb to put Crisp County ahead 4-1 in the extra frame.

Cook tacked on just one run in the bottom half of the inning, leaving the final score at 4-2 in favor of the visiting Lady Cougars.

Blampied went 3-for-3 in the contest with two singles, a double, and two intentional walks.  Brady finished the game 3-for-5 with two stolen bases. Raines and Webb added one hit apiece.

Duckworth pitched all 10 innings for the Lady Cougars in the win and allowed just two runs on seven hits, two walks, and one hit batter, while also recording four strikeouts.

The win over Cook put the Lady Cougars at 2-0 in region 1-AAA competition, and 6-2 overall.

Crisp County is scheduled for two games next week, if hurricane related weather allows them to be played at least.

Wednesday the Lady Cougars are scheduled to play a road game at Schley County, and Thursday Crisp hosts Monroe for a region game at 5 p.m.

The Crisp County Middle School Lady Cougars were also in action on Thursday with a home game against Worth County. CCMS took the win by a score of 8-4 over Worth to move to 5-0 on the season.

Reagan Bozeman pitched for the Lady Cougars in the game. She allowed just four hits and walked two batters while recording 10 strikeouts.

The next game on the schedule for CCMS is set for Thursday at Lee County West.

The Crisp Academy Lady Wildcat softball team played their first region game of the season on Thursday afternoon at home against Terrell Academy. The Lady Eagles of Terrell defeated the Lady Cats on the day by a final score of 18-4.

CA fell to 0-5 overall on the season after the defeat. The Lady Cats are scheduled to play Southwest Georgia Academy for another home region game on Tuesday afternoon at 4 p.m., weather permitting.

The Fullington Academy softball team went on the road for a game at Berrien County on Thursday afternoon and came away with a win by a final score of 8-1.

The Lady Trojans took control of the game in the third inning by scoring five runs. The Fullington batting order accounted for six hits in the frame. Ella McGalliard, Parker Wall, and Carlee Roberts each had an RBI double during the inning, while Marley Jones, Maddy Mcleod, and Lauren Rucker each had singles.

The Lady Trojans later tacked on a pair of runs in the top of fifth frame when Roberts hit a two-run single that scored Taylor Posey and Carmen Phillips.

Berrien scored their only run of the game in the bottom of the fifth.

The Lady Trojans scored the final run of the game in the top of the seventh inning when Roberts reached home plate following a single by Lillie Grace Register.

McGalliard pitched all seven innings for Fullington in the contest to record the victory. She allowed just the one Berrien run on five hits and one walk while also striking out eight batters.

Fullington moved to 7-3 overall on the season with the victory. With the win, the Lady Trojans also handed the previously unbeaten Berrien squad (9-1) their first loss of the season.

Fullington is next scheduled to play a home region game against Community Christian Academy next Tuesday at 4:30 p.m.