Arrest Made in Sumter County Murder 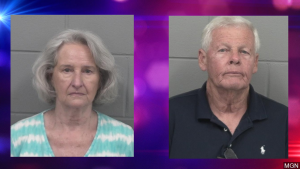 Americus, GA (September 27, 2019) – On Sunday, July 28, 2019, at approximately 7:30 p.m., the Sumter County Sheriff’s Office requested GBI assistance with a shooting investigation that resulted in the death of one individual. The incident occurred at 250 Edgewood Drive in Americus, Sumter County, Georgia. George “Ritch” McCutchen was identified as the victim in the shooting. Subsequent to the initial response and with the assistance of the Sumter County, Sheriff’s office, the Americus Police Department, the Georgia State Patrol, the Crisp County Sheriff’s Office and the Southwestern Judicial Circuit District Attorneys Office, the GBI Region 3 Office conducted numerous interviews, collected numerous items of evidence and later conducted more follow-up interviews.

Both subjects were taken into custody on Friday, September 27, 2019 and taken to the Sumter County Jail where they were processed on the charges.