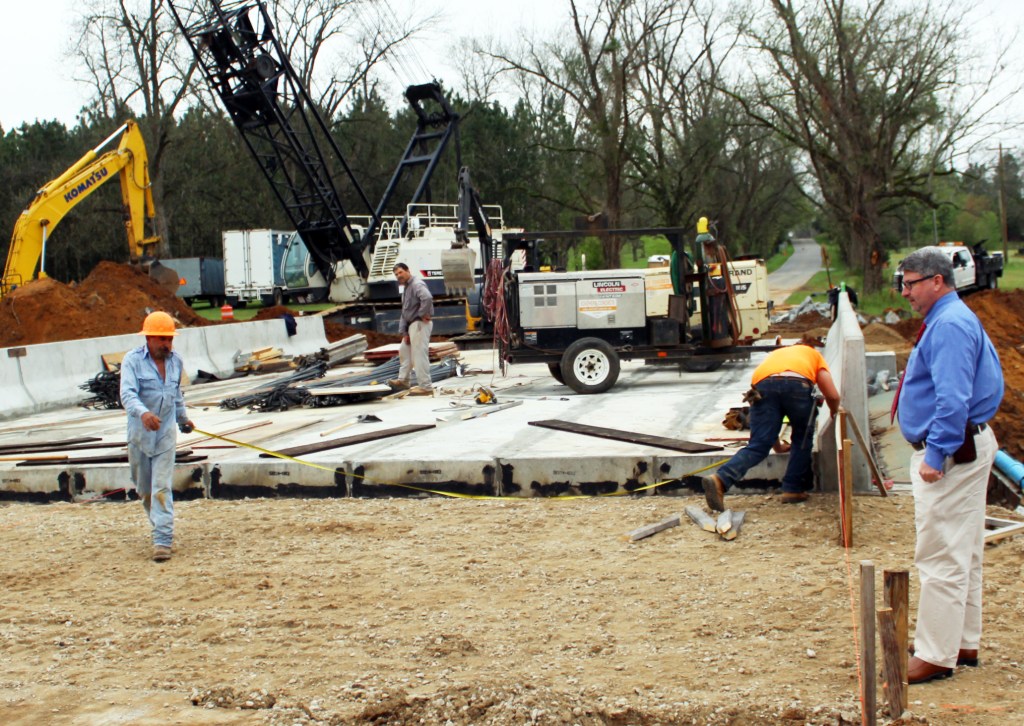 Crisp County Administrator Clark Harrell (far right) checks out the progress coming along on the bridge under construction on Cannon Road. The bridge will replace a box culvert that Harrell said has failed four times since 1998, most recently during the flash flooding emergency that briefly left residents in North Valhalla stranded and without water in early March. Contractors say the bridge should be ready for traffic in approximately two weeks.

Harrell said one of his top priorities is to ensure that their hard work isn’t undone by a future natural disaster.

One of the trouble spots in Crisp County has been on Cannon Road near Lake Blackshear. Many residents in the area were literally stranded when a portion of Cannon Road failed in the most recent flash-flooding event.

“That has been an ongoing problem. The first time that culvert failed was 1998, and this is the fourth time it’s failed,” Harrell said. “So the solution we’re providing this time is a bridge.”

Construction on that bridge has been progressing rapidly. So rapidly, in fact, that Harrell and a contractor at the site on Monday said traffic should resume to normal in as early as two weeks.

The trick now, Harrell said, is finding the funding to pay for the new bridge, which will run around $500,000. Local resident Johnny Floyd, who sits on the state transportation department’s board of directors, has been presented with a list of emergency roadwork needs from the county and has in turn presented that list to officials in Atlanta who hold the proverbial purse strings for funding these sorts of projects.

“I feel pretty confident that the state is going to take care of us on this,” Harrell said, noting that the construction work will not require the county to take on any debt.

Other emergency paved road work needs included on the list presented by the county and by Floyd include:

-Hatley Road west of Stokes Road: Replace four lines of failing cross drain pipes with a box culvert, plus raise the centerline elevation of the road – $200,000 (all costs are estimated),

-Wildwood Drive: Add additional pipes to keep residents from being trapped in subdivision as Wildwood Drive is sole access road – $30,000,

Harrell said the county is continuing to assess conditions of the county’s 250+ miles of dirt roads for repair needs.