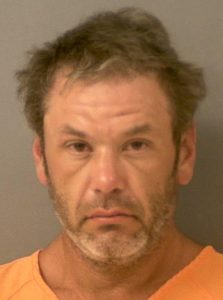 After a short manhunt, a Cordele resident was arrested in Dooly County and chargedwith homicide

On Saturday, June 13, around 9:30 a.m., Crisp County Sheriff’s deputies were dispatched to a report of a person threatening to commit suicide.

Upon arrival, the person had left the scene but the caller was questioned and it was determined that Heath Register, 41, of Cordele was involved in a homicide that occurred earlier in Dooly County.