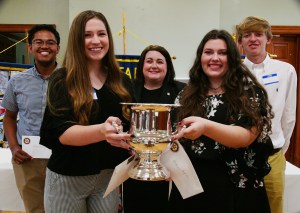 Each year the Rotary Club awards Cups to the male and female graduates from each high school with the highest grade point average (GPA).

Gabriel Sanchez earned top honors and several scholarships while a student at Crisp County High School. He plans to attend Georgia Tech this fall and major in chemistry with a focus on pre-medicine. After Tech, he plans to attend medical school and become a physician and use his dual citizenship to provide healthcare for U.S. and Mexican citizens.

Crisp High graduate Maddi Hughes scored the highest GPA in the Class of 2020 while completing 50 college credit hours in the Georgia Department of Education’s Dual Enrollment Program. She plans to begin her studies in the fall at the University of Georgia majoring in either business or communication. Upon completion of her baccalaureate degree, she plans to enter law school to study criminal prosecution or environmental law.

Crisp Academy’s Katherine Carpenter scored the highest grade point average through all four years and was named the STAR student as a senior. Not only a leader in the classroom, she also played tennis and participated in One Act Play, Literary and Girls Trio.

She plans to attend Valdosta State University in the fall and study criminal justice or psychology.

Julian Floyd first attended Crisp Academy as a kindergartner. As Crisp Academy’s male cup winner, he not only maintained his GPA, but also had time to letter in varsity baseball and basketball, serve as class secretary and was voted “Most Likely to Succeed.” He plans to attend the University of North Georgia in the fall.