Frist Responder of the Month 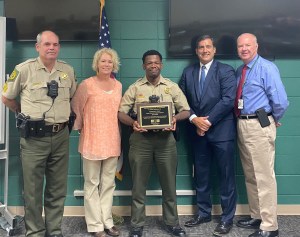 Martelle Davis was born and raised in Cordele, GA. He graduated from Crisp County High School in 2001 and joined the Crisp County Sheriff’s Office the same year as a Detention Officer in the Detention Division. He became a Deputy in 2005 and left in 2007 to pursue other dreams. He continued his public service with the Department of JuvenileJustice and the Chatham County Sheriff’s Office. In 2014, Martelle returned home to serve his hometown community and re-joined the Crisp County Sheriff’s Office as a Deputy in the Detention Division. He later transferred to the Patrol Division where he has served the citizens of Crisp County since2016. In addition, Deputy Davis is currently pursuing aBachelor’s Degree in Homeland Security. Deputy Davis continuously chooses to serve the public and his community in positive ways. On numerous occasions, he has ventured outside the ram of conventional law enforcement activities to promote good will with the public that he serves.