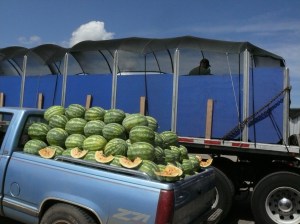 by Neil B. McGahee

Negotiations between the Georgia Department of Agriculture and local business leaders including the Cordele-Crisp County Chamber of Commerce, city and county administrators and the Industrial Development Authority should keep the Cordele Farmers Market open until April 2021 according to Chamber President Monica Simmons.

Five of the state’s farmers markets, including Cordele, were slated to close in cost-cutting measures after the COVID-19 pandemic caused state revenues to plummet.

After all state agencies were ordered to cut 14 percent of next year’s budget, Georgia Agriculture Commissioner Gary Black said he intended to close the markets which would cut $5.6 million from his budget. The plan called for  closing markets in Cordele, Thomasville, Savannah, Macon and Augusta.

The state has been operating farmers markets since 1935 with the largest and most profitable located just south of Atlanta.

The five markets on the chopping block were considered regional markets serving retail and wholesale dealers. The Cordele market is considered a major sales and distribution point for watermelonsBut watermelons are not sold the way they were 30 years ago — farmers bringing their produce to the market.

“They’re packed largely on the farms now,” Black said in a previous interview. They don’t go to the Cordele market. The brokers for Walmart and Kroger are not there.

“So, Cordele is a matter of how do you lose less? I don’t have a business plan to figure out how we make money at Cordele because it’s real good about 10 weeks out of the year and the rest of the year it’s extremely difficult.

Black said the facilities are available for local governments and agencies to lease or take over, should anyone offer.

And that is exactly what the city and county has decided to do.

“The state was wanting to work out a way to keep the Farmers Market open,” Simmons said. “We will begin talks in August. I think they really want to work with us. I am very excited to be in on this community project. We are going to see what we can do as a community to keep our farmers market open. There’s a lot of history here.”