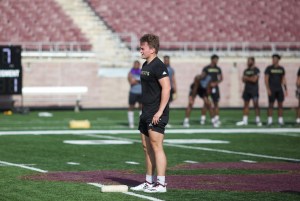 by Neil B. McGahee

It hasn’t taken Alton Stephens long to figure out one thing about Texas in August.

It’s hot, really hot. “It’s not like Cordele heat,” Stephens said. “It seems a lot hotter and it seems to take a lot longer to cool down.  We start practice at 5 am when it’s not so hot.”

Stephens is a long snapper for the Texas State University Bobcats via the Georgia Military College Bulldogs via the Crisp County Cougars.

It almost didn’t happen. “In my senior year in high school, I tore my shoulder,” he said. “It took about five months for it to heal, then I had to relearn how to snap the ball.

In the meantime Kyle Stouffer, a private snapping coach from Wisconsin, was hired to work with Stephens.

“He changed the whole way I snap,” he said. “Before I used my whole body to snap, but that doesn’t make the ball as accurate. He taught me to use abs to make it more accurate.”

Stephens enrolled at Georgia Military College, a two -year school, with a football program and began the rehabilition.

Being a long snapper is not as effortless as it looks. To have the ability to deliver a perfect spiral to either a holder or a punter while looking straight ahead at a 300 pound nose guard that you know is going to try to take your head off is daunting to say the least. Perhaps that is why good long snappers are in such high demand in the National Football League, something Stephens said he has allowed himself to dream about.

But for now, it’s time to try to beat out two other long snappers for the starting position.