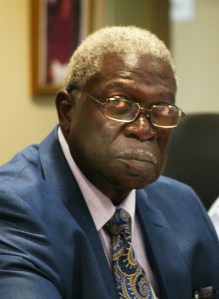 Vienna City Councilman Henry Johnson was killed in a two-car crash Wednesday afternoon on U.S. Highway 41 three miles north of Vienna.
An official who wished to remain anonymous said bystanders told him that Johnson was traveling north in a mini-van on U.S. 41 near Swearingen Road about 12:30 pm when he crossed the center lane and was hit by a large pickup truck commonly called a “dually.”
Given the severity of the crash, which one witness described a “unsurvivable,” Johnson probably died on impact. The driver of the other vehicle was transported by ambulance to a trauma center in stable condition.
Rescue crews from Dooly County Emergency Medical Services and the Pinehurst and Vienna fire departments responded and had to use extrication tools to free both drivers from entrapment.
After retiring as a law enforcement officer in Crisp County, Johnson won a seat on the Vienna City Council in 2012 but was defeated in the 2016 election. He had recaptured his seat in the 2020 election and took the oath of office in January.
“He was a very conscientious man,” said Vienna City Administrator Michael Bowens. “He cared greatly about our citizens, especially our senior citizens. He will be sorely missed.”