The Long Wait for Home 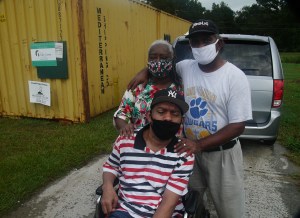 A long held dream may soon become reality for a Vienna couple and their handicapped son.

Laura and William Grace and Nicholas Hooks hope to have a house built for them soon so they can escape the government projects.

They have been waiting a long time.

The wait was made longer when Habitat for Humanity ousted founder Millard Fuller and a contentious legal fight followed. Finally after lots of negotiation, it was agreed that although it could no longer operate as Habitat for Humanity, it could carry on as the Fuller Center for Housing.
But there is the matter of money.

All recipients of Fuller Center assistance must contribute a certain amount of their own money.

“My niece down in Florida got together with some of her friends,” Laura said. “They made a ‘GoFundMe’ site and raised a lot of money. “

But fundraising has taken a big hit.

“We’re a poor county,” Fuller Center director Melissa Langford said. “We have raised quite bit — from community donations and the sale of a house that we had — but I could breathe easier if we had a little more than what we need.’”

There has been progress, Langford said, The lot has been surveyed and as soon as the foundation is inspected, the construction can begin.