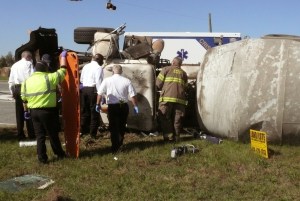 A driver for Cordele Concrete was trapped for nearly 40 minutes after his truck rolled over at the intersection of Old Albany Road and 24th Ave. W. Witnesses said the truck turned over when it appeared the load shifted as the driver made his turn. First responders from Crisp County Fire Department needed numerous power tools including the “Jaws of Life” to extricate the man from the twisted metal of the cab.At one point the rescue attempts were hindered when the driver’s family members rushed the scene. They were pulled back by sheriff’s deputies and bystanders so the responders could do their job.The driver was transported to Crisp Regional Hospital.