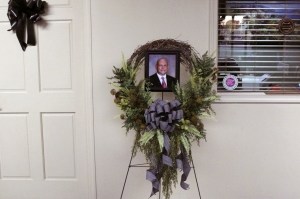 There were heavy hearts at the Cordele City Commission last night as commissioners and city staff grappled with the loss of their leader and friend, City Manager Edward Beach who died suddenly on Tuesday.

“To the citizens of Cordele, Crisp County and the state of Georgia,” he said. “It is with deep regret and heartfelt sympathy from myself and the city commissioners on the passing of our beloved city manager, Mr. Edward Beach. Mr. Beach was a diabetic and in recent months, his illness progressed rapidly. The city of Cordele will miss his valuable service, his municipal knowledge and professionalism. Mr. Beach performed over 30 years of professional local government and physical and managerial service to our community.”

“She is state qualified, so she is very qualified to be the city clerk,” he said.
Turning to the city’s business, Fulford reported funding for the sidewalk projects for Eighth Street, Joe Wright Drive and 13th Street south of 24th Avenue west were not available but work will begin as soon as the funding is there. The Pecan Street project is nearly complete, except for the CSX railroad crossing which must be completed by CSX.

The wastewater collection and Treatment project is funded by Special Purpose Local Option Sales Tax (SPLOST) and the north trunk line has been bid and a contractor accepted.