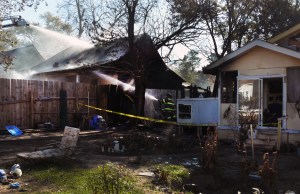 Cordele firefighters attacked a blaze at 304 17th Ave. adjacent to a house next door that burned yesterday. Homeowner David Hidalgo said after several hours spent fighting the fire at the neighboring house, the firefighters were content that the fire had been extinguished.

“I really thought it (the fire) was out,” Hidalgo said. “There wasn’t any sign of fire.”

But the fire wasn’t out, it had found a home in a tree between the houses.

“In the middle of the night, the tree fell onto my house and we soon realized our house was on fire.”

Three trucks from the Cordele Fire department responded and spent nearly four hours at the scene.