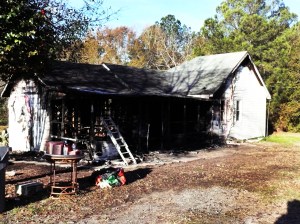 A structure fire Tuesday at 4460 Bedgood Avenue in Arabi destroyed most of the possessions of the tenant, Justin Hughes, including his dog.

Chief Michael Postell and Crisp County firefighters arrived on the scene and found it about 50 percent involved.

“Most of the southern half of the structure was completely involved,” Postell said. “Fortunately there was no one home. All we could do is extinguish it as best we could.”

Postell said neither Hughes nor the structure’s owner has insurance.