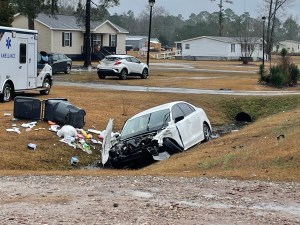 Two people were injured Friday in an accident near the intersection of Joe Wright Dr. and a driveway at 2611 S. Joe Wright Dr.
According to a Cordele Police Department report a 2013 Volkswagen Jetta driven by Kharizma Xsaani Thomas of Cordele attempted to make a right turn onto Joe Wright Drive when the Jetta was hit on the front left by a 2006 Dodge Ram driven by Robert Donnell Harris from Cordele.

Thomas was transported to Crisp Regional Hospital with head injuries while Donnell, although he had significant injuries to his right arm, refused medical attention.