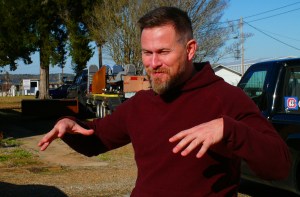 That may be a possibility if Alexander Kane has his way; the road to Hollywood will lead right through South Georgia.

In fact, it would run through a corridor between Crisp and Ben Hill counties.

Kane, a Fitzgerald native, always dreamed of having a career in movies, so after retiring from surveying oil pipelines, he took the leap into acting.

His roles often required him to travel and he was torn between moving to the usual motion picture hotspots — Los Angeles or New York City — or remaining in Fitzgerald with his family of six.

Choosing the second option, Kane created a studio in Fitzgerald.

In October 2018, “Lena and Snowball” a feature movie was filmed in Fitzgerald and now, a second movie starring Bruce Willis is being filmed in Crisp County.

“Wallace Mathis, from Cordele, affectionately known as ‘Gator’ introduced us to the Crisp County dam,” Kane said. “This current movie is a situation where terrorists are holding a dam and nuclear power plant hostage and Cordele is the town that can get flooded. The Crisp County power dam was a perfect location. The whole movie will take place in and around this dam.

“When you grow up loving movies and wanting to be an actor and when you love your community, you combine the two to create jobs, create a long term legacy and with six children, it’s a personal mission to show them that you can do anything you want at any point in your life.”

Kane said the budget for movies like the one being filmed here is usually $5 million to $10 million.

“A lot of that money is spent locally on lodging, catering and vehicle and equipment rental, which bolsters the economy,” Kane said. “Make no mistake, there is a team factor to making a movie. The real hero isn’t the John McLains jumping through a skyscraper. The real heroes are the crew. Every time you see a movie star, there are 250 people all working hard to make sure he is the movie star.”

Willis filmed at the dam on Monday and Tuesday

And this is just the start, Kane said.

“We’re trying to create a sustainable industry in South Georgia,” Kane said. “We’ve got some very big projects with very well-known actors in the genre of the Bruce Willis and the Mel Gibsons and the Clint Eastwoods and many of those projects will kick off soon.”