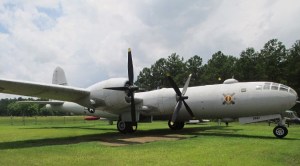 The iconic B-29 “Superfortress” bomber that has guarded the main entrance to Georgia Veterans State Park for 73 years may soon be only a memory.

At the February meeting of the Crisp County Board of Commissioners, County Manager Clark Harrell revealed that the owner of the plane, the United States Air Force, wants it back.

“The Museum of Aviation at Robins Air Force Base wants the plane returned for preservation,” Harrell said. “This aircraft is actually on loan from the Air Force to the Board of Commissioners.”

“But the plane has been sitting out in the elements and it’s literally deteriorating from the inside out,” Harrell said. “Because of its history — it is the only B-29 aircraft — the Air Force wants to preserve it.”

Harrell said after the plane is restored, the Air Force wants to place it in the aviation museum.