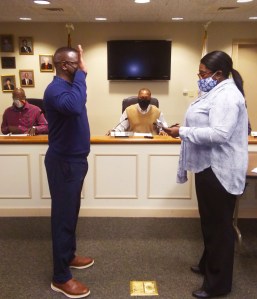 John T. Mathis was sworn in to fill the vacant Vienna City Council seat of Henry Johnson, who died in an auto accident last year.

The council authorized multiple bids of $80 per acre or $4,690 from Lee Harris for the 2021 farm lease of 62 acres of city-owned land near Highway 90 and $1,119 to Ricky Crozier, owner of R&M Lawn Service for cemetery lawn maintenance.

Council heard the first reading of an amended cemetery ordinance which would allow selling lots in certain sections. City Administrator Michael Bowens asked if buyers would be subject to the law that mandates only ground level memorials or slabs in the cemetery.

“If everything is at ground level, it’s easier to maintain them,” Bowens said.

Bowens also reported that the Vienna Fire Dept. was awarded a $3,000 forestry grant from the and the city plans to match it. A citizen, Montravious Adams, said he plans to sponsor a golf cart scavenger hunt in March

Downtown Development director Janet Joiner said a group of Dooly County High School students had approached her and asked if there were any community service projects available for them to work on. The students also are planning a Spring Cleanup in March.