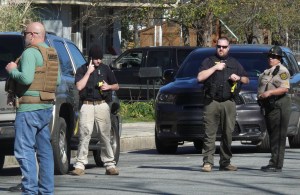 Cordele Police and Crisp County Sheriff deputies waited along 12th Ave. E where Willis Glover, a man with warrants for his arrest was thought to be hiding. A later sweep of the house failed to find him. Photo by Neil McGahee

Local law enforcement authorities surrounded a residence on the northeast corner of 12th Ave. and 2nd Street for nearly half an hour Wednesday afternoon while they searched for a wanted subject believed to reside there intermittently, according to Crisp County Sheriff Billy Hancock and Cordele Police Department Captain Andrew Roufs.

Law enforcement officers came away empty handed, however. They were looking for a man named Willis Glover, Hancock said, who is wanted on several pre-existing charges.

Our officers had gotten a tip on a known wanted individual and when we approached that individual in conjunction with the sheriff’s office… they started running and ran for several yards and ended up going into the residence,” Roufs said.

“No one at this point is in custody in relation to this incident,” Roufs added. “A weapon was recovered in the route in which the subject ran.”

Hancock said the incident began about five blocks from the residence in question and that one of his deputies saw Glover drop a gun while running and enter the residence.

“After talking to the family for a little bit, they agreed to let several officers go in, search the house, and search the premises out back. We did not locate him, but we’re still searching for him,” Hancock said.

This story is still developing. Check back for updates.