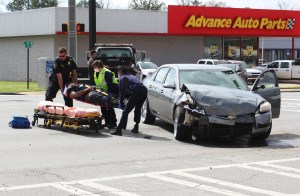 CUTLINE: A passenger is loaded onto a gurney by first responders after a mid-day two-car wreck at the intersection of 16th Ave. and 3rd St. Wednesday before being transported to Crisp Regional Hospital for treatment. The driver of a second vehicle was also transported to the hospital.

Two people were transported by EMS to Crisp Regional Hospital after a two-car wreck at the intersection of 16th Ave. and 3rd St. shortly after noon Wednesday.

The two injured people were secured by first responders on backboards in order to prevent or minimize spinal injuries, but the injuries were non-life threatening. The cause of the wreck is still under investigation.

Check back for updates as more details develop.