Home catches on fire in Pitts 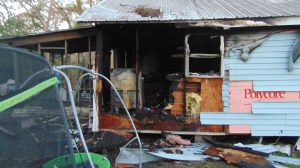 The Pitts, Rochelle and Wilcox Prison Fire Team, along with County Fire/EMA director Larry Brown responded to a house fire at 108 12th Street South in Pitts.  When firefighters arrived, the home was fully engulfed with visible flames from the rear of the home and the attic area.  The smoke was so heavy it caused visibility problems on U.S. Highway 280. Sheriff Robert Rodgers and Constable Bill Talley provided traffic control.  Chief Brown said the fire apparently started in the area behind the kitchen stove. The homeowner, Shirley Taylor said she was not insured and the home was a total loss from fire, smoke and water damage. Photo by Lucas Allison