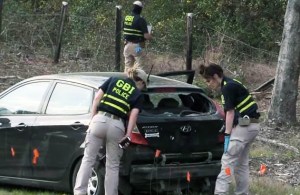 GBI investigators comb through the car that was driven by Kelly Shannon Bowen, 51, of Vienna as he fled police. PHOTO BY LEWIS LEVINE, COASTAL NEWS SERVICE

Bulloch County, GA (March 14, 2021) – On Sunday, March 14, 2021, the GBI was requested by the Georgia State Patrol to investigate an officer involved shooting.

At approximately 11:08 a.m., the Tattnall County Sheriff’s Office and the Reidsville Police Department were dispatched to Rabun Avenue in Reidsville, Georgia in reference to a home invasion and kidnapping at gunpoint. The kidnapper was later identified as Kelly Shannon Bowen of Vienna, GA. The family of the hostage pursued Bowen and  victim by vehicle until law enforcement intercepted the pursuit in Collins, Georgia. Shots were fired by Bowen at the hostage’s family during the initial pursuit. Bowen fired at a Georgia State Patrol Trooper on I-16 in Candler County, grazing the trooper in the head. Bowen attempted to ram multiple officers during the multi-county chase. During the pursuit, the PIT maneuver was attempted multiple times, with success ending the pursuit on the side of I-16 in Bulloch County. Once the vehicle was stopped,  Bowen removed the hostage from the vehicle at gunpoint and then crossed a fence along the edge of I-16, entering the backyard of a residence. The hostage was able to get free from the Bowen, who was then shot by multiple law enforcement officers from multiple jurisdictions: Georgia State Patrol, Tattnall County Sheriff’s Office, Reidsville Police Department, Evans County Sheriff’s Office, Candler County Sheriff’s Office, and Bulloch County Sheriff’s Office. Bowen was flown to Memorial Health University Hospital in Savannah where he died. During the shooting, a nearby residence was struck by gunfire and an occupant suffered from a minor injury that did not require medical attention.

At the request of the Georgia State Patrol, the Georgia Bureau of Investigation will conduct an independent investigation, which when complete, will be turned over to the Ogeechee Circuit District Attorney’s Office for review.