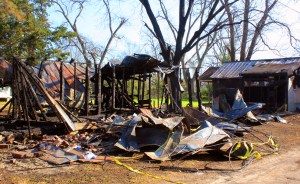 Fire commissioner Insurance and Safety Fire Commissioner John F. King announced today that a Crisp County structure fire on March 8 was an act of arson. The fire at 1108 N. Joe Wright Dr. in Cordele seriously injured Cordele Fire Department Capt. Mark Allen who sustained fractures in both legs and broken ribs in addition to smoke inhalation when a chimney collapsed and fell on him.

“We look first for things like electrical causes or any kind of inclement weather,” he said. “Once we rule out any of those causes, we begin to suspect arson.”

Arsonists use a variety of  accelerants, he said, including gasoline, diesel and

kerosene. If they are caught, a person convicted of first-degree arson faces 20 years in prison, a stiff fine and sometimes restitution for the burned structure.

“The structure had severe fire damage throughout and was almost completely destroyed by the fire,” King said. “Unfortunately, a member of the Cordele Fire Department suffered multiple injuries while fighting this fire. I am thankful for his bravery and praying for his speedy recovery.”

Allen was initially treated at Crisp Regional Hospital prior to his transfer to the JMS Burn Center at Doctors Hospital in Augusta. where his smoke inhalation was addressed. He did not suffer any serious burns.

He was discharged from the burn center and is recovering at home according to Cordele Fire Chief Augusta Telfair.

“I just spoke to him this morning and he was in very good spirits,” Telfair said “Of course we know it’s going to take a long time for him to heal.”