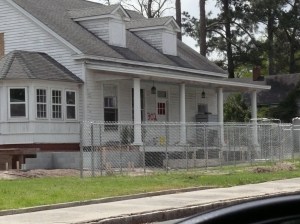 The district, bounded by the CSX Railroad tracks, Owens St. 16th Ave. E. and 6th St. in Cordele, is a collection of houses of a unique architectural style ranging from the Victorian houses of the late 1800’s to the Craftsman style houses of the mid-1900’s.

It was designated in 2004 as having historic significance and residents living within the district are expected to follow the guidelines established by the commission.

The purpose of those guidelines is to preserve the character of all buildings and insure that any new construction should follow the guidelines and try to blend with its historic neighbors.”

But that hasn’t been the case with Jeff Sinnott, an occupant of the house.

“Over the past three to three-and-a-half years, there has been ongoing construction on the property — all against the guidelines of the Historic Preservation Commission and the O’Neal Historic District,” said Ben Drennon, an O’Neal homeowner. “A few weeks ago he began putting up a chain link fence in the front yard. You cannot have a front-yard fence anywhere in the district. That was the straw that broke the camel’s back so I contacted Jack Wood from the Historic Preservation Commission and Cordele City Commissioner Wesley Rainey.

“We tried to engage Mr. Sinnott,”Drennon said. “This thing has been snowballing for quite a while and seems to have gotten a lot worse if we try to talk with him.”

In the last five years, Drennon said the two commissions have fought each other.

“There have been roadblocks with each commission pointing their finger at the other,” Drennon said. “The Historic Commission says it’s the city’s fault because they don’t enforce code regulations and the city says it’s the Historic Commission’s fault because they never meet, they never do anything and they don’t stand by what they do.

“Jack Wood from Code Enforcement and Lewis New from the police department just throw up their hands and say ‘the city told us not to enforce anything.’ It has shown a light on the dysfunction that exists between the two departments.”

Frustrated, Drennon and several other homeowners in the O’Neal district asked to get on the agenda to address the Historic Commission.

In the meantime, Drennon said Sinnott spray painted a message on the side of the compound.

“To all the complainers out there, next meeting of the Historic Commission. BE THERE!”

At the meeting, the O’Neal homeowners pointed out that no application for any work was ever completed properly and it never came before the board and was never discussed, as is the prescribed process, yet the city issued a permit.

“The city issued a permit against its own rules, “Drennon said. “As far as the fence, Jack Woods attempted to get some help for us — the neighbors — he spoke to Mr. Sinnott and explained that he couldn’t build the fence without a permit. At this point, Roland (McCarty), our new city manager intervened inappropriately and ordered Jack Wood to issue a permit.

“Mr. Sinnott attended the meeting and spoke very powerfully and colorfully,” Drennon said. “He became very upset when he was told that the ordinances say that if a resident of the O’Neal district builds without a permit, that resident will be forced to tear it all down.

“He alleged that the chairman of the committee had lied to him and that he would see us all in court. Then when he realized his lies were not going to be tolerated, he angrily stormed out but he remained in the parking lot. The police were called and everyone was escorted to their cars.”

“I hear people say how trashy Cordele is and that is true. There are a lot of derelict houses and slum lords that should be ashamed of the condition of their houses but look at the Virginia Highlands area in Atlanta; it all started with one house It’s never going to succeed if we don’t try.”

(Note: Several attempts were made by the Dispatch via telephone and in person to contact Jeff Sinnot or his daughter, Stephanie Sinnot, the homeowner, were unsuccessful)