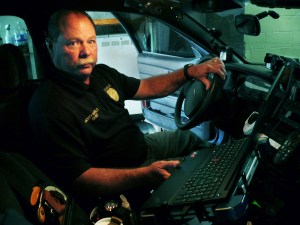 Rochelle Police Chief show one of four mobile computers and printers that was purchased with a $10,000 technology grant. Photo by Neil B. McGahee

Rochelle Police Chief Mickey Barfield felt his officers were getting behind the eight ball as far as keeping up with current police technology.

“All of these smaller agencies like ourselves; it’s hard to come by the funds to purchase items like this,” he said. “Just the four computers, the printers and of course installation used up most of the grant.”

Georgia Chiefs Association to inquire about a technology grant it offered.

They said they had already distributed all their funds but offered to include him on a waiting list for next year when the funds come available.

“In January, I got a call that they had awarded the Rochelle Police Department a $10,000 technology grant,” Barfield said. “It enables small police departments to purchase computers for their cars along with the stands and printers.”

“We were wasting a lot of precious time and public visibility,” Barfield said. “After every call that required a written report, the responding officer would come back to the station to write his report. That keeps him off the street and unable to take calls and out of sight of the citizens.”

That last part is crucial.

“We average about 275 to 350 calls a month,” he said. “And that includes everything from issuing a speeding ticket to responding to a fight or a shooting.

“The state of Georgia mandates now that we report a lot of information to them and this new technology will allow us to meet that mandate.”