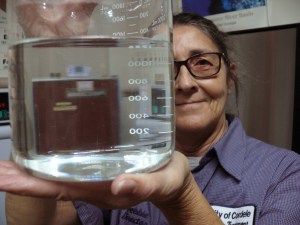 Cordele’s water supply and its safety depends on 13 employees, led by Director Debbie Wright, a 35-year veteran, who should be nonchalant about any recognition her department receives.

But there she was at last week’s Cordele City Commission meeting gleefully announcing her team had received another certificate from the Georgia Association of Water Professionals.

“This award is recognition of complete and consistent compliance with the Safe Drinking Water Act of 1974,” Wright said. “This isn’t our first one. We have won every year since the award was first given in the 1990s.”

The Safe Drinking Water Act (SDWA) was signed into law in 1974, and reauthorized in 1996, to ensure public health protection through compliance by public water systems with federal drinking water standards, including all monitoring and reporting requirements. The law also placed increased emphasis on providing the public information about the quality of their drinking water.
Four wells, each 500 feet-deep, draw water from three aquifers: The Ocala Limestone, the Tallahatta and the Wilcox.

Wright said water samples are taken from every part of the city and tested for contaminates like heavy metals, volatile organic compounds (VOCs) and synthetic organic compounds (SOCs) that are emitted as gases from certain solids or liquids.

For public water systems to deliver safe and reliable drinking water to their customers, there must be testing — lots of testing — because if the water supply becomes contaminated, consumers can get seriously ill.
“One of the most important steps is regular testing for coliform bacteria,” Wright said. “Coliform bacteria is unlikely to cause illness, but its presence in drinking water is an indicator that disease-causing organisms like E. coli could be in the water system.”
E. coli is a type of fecal coliform so when labs find total coliform in drinking water samples, the lab also tests the sample for E. coli.

“This city’s water is very good,” Wright said. “We are proud of what we do and we try hard to keep it that way.”