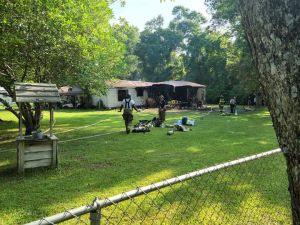 The woman that died in a house fire Monday was identified as Sherry Duncan, 56, according to a press release from Fire Commissioner John F. King.

Crisp County Fire-Rescue was dispatched at 6:03 am to the 3000 block of U.S. Hwy 280 E. for a structure fire with occupants trapped.  According to Crisp County Fire Department Assistant Chief Russell Ayotte, the home was fully engulfed in flames when units arrived.

“The two male occupants escaped the fire, but tragically Ms. Duncan was trapped inside due to the location of the fire blocking any exit path,” King said. “An examination of the scene revealed that the origin of the fire was on the front porch near the door. There is currently no evidence of criminal activity, and the fire appears accidental in nature.”

The Fire Investigations Unit is assisting the Crisp County Fire Department and Sheriff’s Office with this investigation.