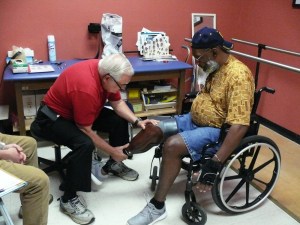 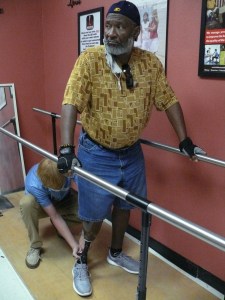 He said he wasn’t going to cry.

But when prosthetic fitter John Rodman slipped Holder Mathis’s new leg over the stump that has hobbled his movement, he struggled to keep his composure even as tears of joy welled up in his eyes.

Mathis lost his left leg to diabetes in 2019 and

that began a downhill spiral. Shortly after the amputation, he learned he couldn’t move into an assisted living facility because he had no insurance.  A former high school classmate offered him a place at her house, but after a short period of time, he found that the living arrangements weren’t conducive to someone with his needs —no ramps, no handicapped bathroom — so it made the living arrangements awkward.

“Once you lose any part of your body,” the former truck driver said. It takes a reconstruction of your vocational abilities. You have to learn how to wash your face or break a fall.”

“Things that you once took for granted now become an everyday reality.”

The first steps were awkward — like watching a toddler take his first steps — and Rodman had to steady him.

“This is both humbling and inspiring,” Mathis said. “This isn’t just my leg. It belongs to everyone who helped me be able to purchase this. There is a whole community out there who are good people, generous people, who gave money, their money, to help me, someone they didn’t even know.”

But the donations trickled in — $1 here; $5 there —until nearly $2,000 had been collected. Learning of the funding drive,  donations from individual donors and several corporate donors flooded in until the $5,000 mark was reached.

As the leg was fitted, Holder Mathis blinked to erase his tears.

One tear escaped his eyelids and wove a squiggly trail down his cheek.

“What I have discovered is that we all go through amputations every day,” he said. “Some people have amputations from bad relationships, from addictions, from making bad decisions. Amputation may mean you cut off something that used to be alive, but is now dying within you and must be removed before it can infect your entire body.