A Gator Ade for Everett 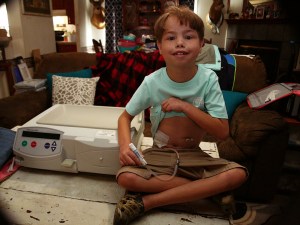 Everett Pettis, a nine-year-old boy from Arabi, has mixed feelings about June 15, the day he receives a new kidney.

“I’m excited but I’m scared too,” he said as he wrapped up what could be one of the last dialysis treatments in his short life.

It has been a struggle just to get into the surgical suite.

Everett Pettis was born in February 2012 with underdeveloped lungs and a 6.67pH blood level, far too acidic for his little body. Normal human body pH levels range between 7.30 and 7.45.

Doctors told his parents, Ben and Angie Davis that Everett only had a three percent chance of survival and if he did survive, he would never walk, talk or breathe on his own.

But the Davis’ only heard there was a chance.

He was rushed to the Children’s Hospital of Georgia in Augusta and put on a life support machine, which carried out the functions of the lungs, kidneys and heart allowing his body time to heal before functioning on its own.

After finishing the breathing treatments, he was diagnosed with laryngomalacia, which is extra tissue near his larynx that blocked his airway. Surgeons removed the extra tissue and oxygen was pumped into his lungs to keep his airways open. After three weeks of treatment, Everett’s lungs were completely developed and he was able to come home.

The happiness was fleeting however.

He was rushed back to Augusta where he was diagnosed with chronic renal failure due to all the complications at birth. His right kidney had stopped working altogether while the left one was enlarged and only functioning at about two-thirds capacity.

The couple realized that a

transplant was the only viable option.

After three years of waiting, they got the call that a kidney was available.

But transplants are expensive and the Davis’ didn’t have nearly enough money. Just the bill for labs, medications and transportation to Augusta is $771,596.

On August 29, the Wraith Riders, a Cordele chapter of the Iron Order Motorcycle Club sponsored the Everett Pettis Kidney Transplant Poker Run. The entry fee was $20 per bike and $10 per passenger and included a lunch at the end of the ride. There was also a silent auction for items donated by local businesses and a 50/50 raffle with all proceeds going to help pay some of the mounting medical bills.

“The money that was raised by those two events gave us the funds we needed for the transplant,” Angie Davis said. “All we could do is sit and wait for a suitable kidney donor.”

Ben Davis woke last December unable to support any weight on his legs. He was taken to Tift Hospital for an MRI, but during the process, his heart stopped and he suffered a spinal cord stroke, caused when the blood supply to the spinal cord is cut off. He was resuscitated and transferred to Shands Teaching Hospital in Gainesville, Fl.  The doctors at Shands, sent him to Warm Springs, then he was transferred to a Columbus hospital where he is currently awaiting transfer to a nursing home.

On Tuesday, June 15, at 7:30 am, the nurses at Eggleston Hospital in Atlanta will take Everett to the surgical suite for a 6 to 9 hour procedure. When it is all done, Everett said he is going to ask for something he has never had.

Morning wreck on I-75