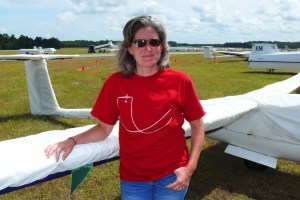 Reigning Soaring Champion Sarah Arnold will compete in the Fly Cordele event before leaving for France to defend her title. Photo by Neil McGahee

A world champion will be flying over the cotton and peanut fields of Crisp County for the next three or four days.

Sarah Arnold, the reigning women’s world soaring champion will pilot her sailplane in Fly Cordele, the south regional competition of the Soaring Society of America.

“There are six classes of gliders,” Arnold explained. “I usually compete in the standard class, which are gliders with a 15-meter (49.2 feet) wingspan, carries water ballasts, has no flaps and has a retractable landing gear, but for this meet, I will fly in the 18-meter class.”

This year’s competition features 50 sailplanes in honor of the 50th year, the meet has been held in Cordele.

After Cordele, Arnold will move on to Montlucon, France to defend her world title.

Arnold began flying when she was 13, piloting ultra lights. She celebrated her 17th birthday by earning a Canadian private pilot certificate.

She moved to Benton, Tennessee in 2001, and established a business at a nearby glider port and at age 24, became the youngest commercial gliderport operator in the country.

But more than anything, she wanted to fly. In 2006, Arnold took part in her first major competition.

To the outsider, the rules seem a bit puzzling.

Gliding competitions utilize “tasks”  — aerial routes around specified turn-points, plus start and finish points — that finish back at the base. Weather, the performance of the gliders and the experience level of the pilots, dictate the length of the task.
Points are accrued each day based on their speed. The pilot with the most points is the winner

Arnold is a fierce competitor, but it is the sheer thrill of flying — utilizing all the skills necessary to keep a motorless aircraft aloft —that satisfies her most.

“We go out on these long tasks and it’s just you alone,” she said. “That is the part of aviation that is just for me.”