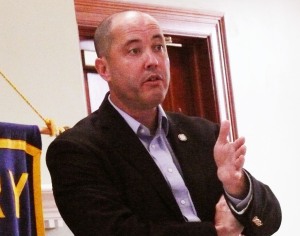 If you think that gang-related activity is reserved only for the western states, Georgia Attorney General Chris Carr has a message for you.

“You’re not alone.” he told the Cordele Rotary Club Wednesday. “They’re out there. About two years ago the Georgia Gang Investigators Association released a survey that said 157 of 159 Georgia counties had recorded gang activities. You know what that means? It means two counties lied.”

Indeed, Georgia, like any other state, has both home grown as well as nationally known gangs as well as local ones. And both types of gangs flock to the Peach State for one thing — money.

“It doesn’t matter how,” Carr said. “It can involve drugs, human trafficking or cyber crime.”

Carr spoke to the Rotarians about the problems the state faces, including opioid misuse, gang violence, human trafficking, elder abuse and consumer fraud. He established and leads the Statewide Opioid Task Force – which now has more than 400 members – and the Georgia Anti-Gang Network – which is focused on strengthening multi-jurisdictional investigations and prosecutions.

Carr is also a champion for the state’s Sunshine Laws, working each day to ensure that government operates openly and transparently. In 2019, he announced the creation of the state’s first-ever Human Trafficking Prosecution Unit at the Department of Law. Under his leadership, that unit will work with statewide partners to aggressively combat buyers