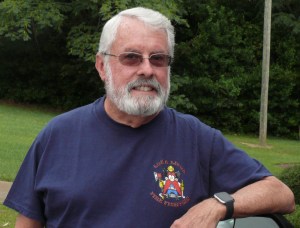 And he has some unsettling ideas about the way the bigger buildings, primarily hotels, around Cordele are built.

The retired fire chief, fire marshal and disaster-preparedness coordinator for the Loma Linda Fire (California) Department, now lives in Crisp County, where he is the CEO of his own company, Crawford Specialty Group, and immersed himself in studying fire codes, both residential and commercial.

Crawford was born in Sullivan, Missouri, near the famous or infamous, Route 66, where he lived life in a small town.  A devout Seventh-Day Adventist, he attended a church-sponsored college after high school.

“I had a college degree and a solid work history, but I couldn’t find a job,” he said.

With no job prospects in sight, he applied for a volunteer mission appointment with his church to teach in Ethiopia, then settled back and waited for a telephone call.

He got the call and traveled to Ethiopia where he worked for 14 months as a science teacher.

After he returned home to Missouri, the West came calling — specifically Loma Linda, California where his father had graduated from the Loma Linda University School of Medicine. He made the 25-hour trek across nearly half the country to California and joined the Loma Linda Fire Department, which at that time was primarily a volunteer organization.

“I never planned to be a fire fighter,”

Over the course of 31 years, Crawford moved up the ladder from volunteer firefighter until 1998, when he was named fire chief, fire marshal and disaster-preparedness coordinator. Health concerns, however, led him to request a demotion to division chief.

He said the accomplishments he savors most was convincing the City Council to enact a comprehensive fire sprinkler requirement in 1991 and persuading the city to start a full-time paramedic service in 2000.

In, Crawford moved to Crisp County to be close to his family, who had also moved here. He started his own company, Crawford Specialty Group, and immersed himself in studying fire codes in residential and commercial buildings.

One plan he studied a condominium in Surfside, Florida  particularly bothered him.

“Three years before that building collapsed,” Crawford said. “Engineering studies showed that water from the pool was leaking and settling undermining the strength and integrity of the pool.”

That collapse and others like it, including the World Trade Center was caused by what Crawford says is “lightweight construction.”

A 2018 engineering report by Morabito Consultants corroborated Crawford’s findings and said the owners at Champlain Towers South were facing repair costs of anywhere from $80,000 for a one-bedroom unit to $330,000 or so for a penthouse.

The deadline for payment, was July 1.

Contrast that to the damage caused when on July 28, 1945, a U.S. Air Force B-25 Mitchell bomber crashed into the Empire State Building while flying in thick fog.

Several months later a technical report by a national group said lightweight construction was a main reason the building collapsed.

The architect had designed the outer skin of the World Trade Center to be integral to the support of the structure rather than the inner core. The connecting

Bolts and steel, which were unprotected, were coated with a substance called monocot. When the planes flew into it, they exploded and the moncoat was blown off. Unprotected, the steel began to warp and pull away from the skin and it collapsed.

“Any building that is built that way, is going to collapse,” Crawford said. “In subdivisions they all have wooden trusses holding up the roof. They are called firefighter killers. If it catches fire it’s going to collapse.

“That’s why we have codes and regulations. Over time and supported by  scientific input, they save lives.”