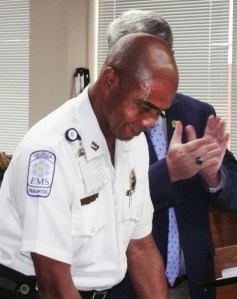 Retiring Assistant Director of Crisp Emergency Medical Services Jerome Outlaw tried to keep his emotions intact as he was honored with a proclamation by the Board of Commissioners Thursday.

“During the last 41 years Jerome has responded to thousands of calls,” the proclamation reads. “He has been there for people during some of the worst times of their lives.”

Outlaw joined Crisp County EMS in October 1980 and moved through the ranks eventually being named assistant director in. 2018.  His retirement is effective July 31, 2021. Photo by Neil B. McGahee.